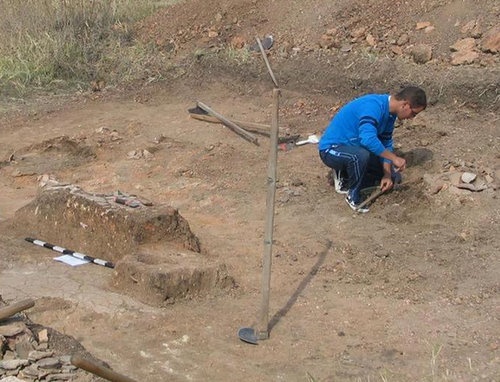 A photo of the part of the excavation site near Telish. Photo by Trud Daily

A prehistoric home dated back 7000 years has been uncovered by a team of Bulgarian archaeologists at Telish in the central northern District of Pleven.

The team led by archaeologist Ventsislav Gergov is convinced that the home found in a place known as "Laga" is part of a village with at least 30 houses.

"Our ancient predecessor constructed amazingly robust homes, much more robust than many of the contemporary apartment buildings," Gergov believes.

"The walls of the homes were made of stamped clay mixed with cow manure and straw, and were additionally supported with wooden poles. This is how the home becomes monolithic and acquires amazing heating isolation," he explained.

Gergov has found parts of over 40 highly-ornate ceramic vessels inside the home as well as two clay ovens built one over the other.

The excavations of the site will continue for one more week because of lack of funding. All finds will be turned in to the Pleven Regional History Museum.

This is not Gergov's first prehistoric discovery at Telish; a place which has turned out to harbor some of the oldest remains of civilized settlements in the world.

The archaeologist is also the author of a local project exhibiting two reconstructed rammed earth homes modeled after the findings in the prehistoric excavations as part of an open air museum.