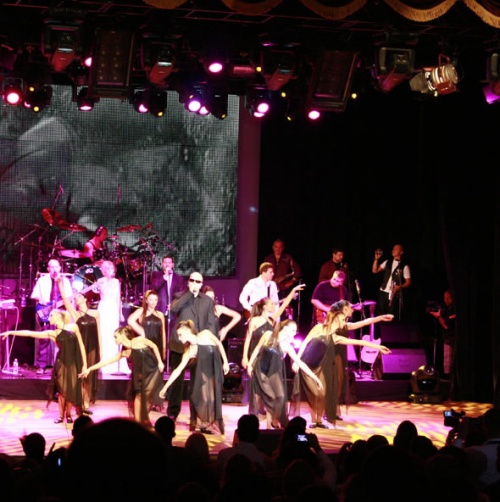 Slavi Trifonov performs for the Bulgarian community in Boston. Photo by SME

The concert of popular Bulgarian TV show host and singer Slavi Trifonov in Boston is reported to have been welcomed with euphoria by the Bulgarian community there.

According to the report of the "Slavi's Show" that Trifonov hosts on the bTV channel, the singer's first of his total of six concerts for the Bulgarian immigrants in North America lasted more than 2 hours, with the audience giving the performers constant standing ovations.

According to the head of Trifonov's "Ku-ku Band", Evgeni Dimitrov, the audience shocked the ushers in the hall on a number of occasions by forming spontaneously "horo", a traditional Bulgarian folk round dance.

The concert's after-party is reported to have been "very emotional" and to have continue with autographs and pictures until 2 am in the morning.

Slavi Trifonov and his band and ballet dancers are staging their second North American gig in New York City the night of September 25, Saturday.