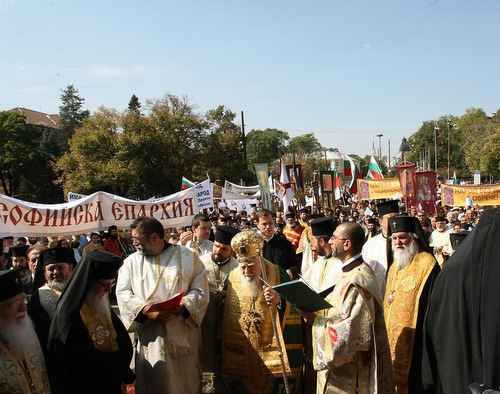 Some 10 000 people took part in a procession in Sofia organized by the Bulgarian Orthodox Church to demand the study of religion in schools.

The rally, which was led by the Bulgarian Patriarch Maxim, was in support of the Church's demands to introduce religion as a subject throughout the entire school education – from nursery schools to the 12th grade.

The procession started at the National Palace of Culture and culminated at the Alexander Nevsky Cathedral, where Patriarch Maxim and the bishops performed a service praying for the children of Bulgaria and for the introduction of the obligatory study of religion in schools.

According to the Bulgarian Orthodox Church, the measure is supposed to help breed moral values and greater spirituality in Bulgarian youth.

The rally participants, seemingly including Bulgarians of all ages and walks of life, carried banners saying things such as "A Nation without Morals Is Doomed" or "66 Years of Atheism Are Enough!", apparently referring to the fact that religion was removed as a subject from school curriculum after the leftist coup d'etat of September 9, 1944, which ushered into the communist period.

The church tabled a petition for the introduction of religion in schools to the President, Parliament, Council of Ministers, and the Ministry of Education.

At present, religion is available in some Bulgarian schools as an optional subject.

Bulgaria's Education Minister Sergey Ignatov has expressed skepticism about the demands of the Orthodox Church. He pointed out that religion is something that cannot be taught academically but should be put forth as values by each family.

He did say, however, that he will table the proposal of the church to the Council of Ministers, and that even though no changes are possible in the school curriculum at present because the academic year already started, the matter with the study of religion will be widely debated.