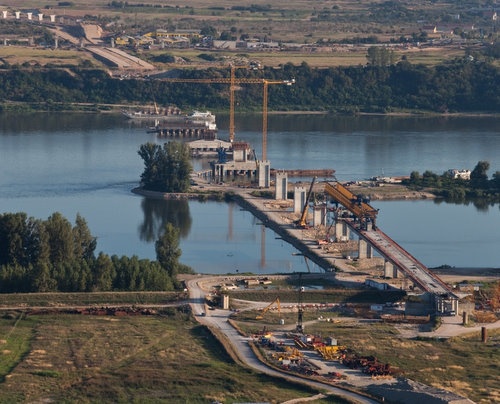 Danube Bridge 2 is supposed to be completed by July 2011. Photo by danubebridge2.com

Two foreign companies constructing large infrastructure projects in Bulgaria are "twisting the arms" of the government, according to Deputy Transport Minister Ivaylo Moskovski.

During a heated debate at the Parliamentary Committee on Transport on Thursday, Moskovski said that the Spanish company FCC constructing the second Danube bridge between Bulgaria and Romania, and the Italian Astaldi working on the modernization of a major railroad are demanding dozens of millions from the Bulgarian government in addition to the contract sums.

"We are with our backs against the wall, and they are twisting our arms," Moskovski told the MPs angrily, accusing the former government of signing deals with the two foreign companies, which he believes won the respective tenders by offering dumping prices.

Thus, FCC won the tender for building "Danube Bridge 2" by offering a price of EUR 99.5 M, twice less than any other bidder; Astaldi won the deal for the modernization of the Parvomay-Svilengrad railroad with a price of EUR 162 M with the other best bids being for EUR 377 M and EUR 400 M.

During Thursday's sitting of the committee, Moskovski got into a bitter fight with MP Petar Mutafchiev, Transport Minister in the Stanishev government (2005-2009) as to who is to blame for what have been described as contracts that are unfavorable for Bulgaria. Bulgaria's Transport Minister Alexander Tsvetkov was absent from the debate.

Moskovski announced that the government had had to renegotiate the deal with Astaldi. Thus, instead of completing the entire section between Parvomay and Svilengrad on the Turkish border, Astaldi will complete the railroad between Parvomay and Dimitrovgrad for a total of EUR 64 M. The remaining EUR 98.5 M will not be paid to the Italian company. EUR 70 M of those come from the EU pre-accession program ISPA, while the rest is funding from the European Investment Bank.

Thus, Bulgaria will lose the ISPA money in question because of the expired deadline that the EC refused to extend for this particular project. The European Commission has offered to finance the completion of the railway with money from Operational Program Transport.

The modernization of the Plovdiv-Svilengrad rail line was divided into three sections. The first one, from Plovdiv to Parvomay, is being carried out by the Greek company TERNA and is 98% ready. Since 2007, Astaldi has completed 75% of its section, according to the State Company Railway Infrastructure. Yet, because of the renegotiated contract with the Italian company, the final section – from Dimitrovgrad to Svilengrad will now be funded anew from the EU Transport Program; it will cost EUR 209 M, which will mean that some other infrastructure projects will be terminated in order to use their money.

The terms with Astaldi were renegotiated after in July the company threatened to withdraw because of delays with the expropriation of private lands, and because it was not certain if the Bulgarian government could fund the project. The final agreement between the two parties provides for no penalty demands, according to Moskovski.

With respect to the construction of Danube Bridge 2, the Deputy Minister of Transport said FCC had threatened to withdraw from the project if it did not get the additional EUR 90 M that it demanded, even though it won the bid with a price of EUR 99.5 M.

A company representative cited by the Dnevnik Daily has stated that FCC had no intention of leaving but had requested additional funds for its work because of delays caused by the Bulgarian and Romanian authorities; he has not specified the precise sum requested.

According to a government source, the Spanish company has asked the Bulgarian government if it had the money to pay for the entire project. FCC is said to have asked for a compensation of EUR 30 M from Romania because of the delayed access to the Romanian bank of the Danube but the consultant had recognized only EUR 5.5 M; it still has not ruled on a demand for EUR 50 M more from Bulgaria, the source said. Bulgaria might have pay another EUR 10 M because it granted FCC a concession for extracting 1 million cubic meters of construction materials; the lack of such materials is said to have delayed the project substantially.

A total of EUR 69 M have already been paid to the Spanish company for the construction so far. The part of the bridge that goes above the river has been left for 2011, and FCC has focused on the bank structures. The FCC also won another tender for the construction of adjacent infrastructure worth EUR 62.4 M.

Through international tender procedures, on 30th January 2007 the Spanish company FCC was appointed as Contractor under FIDIC conditions for the design and construction of the main bridge (Contract 1) whereas the French-British consortium Ingerop/High-Point Rendel was appointed as the Engineer under FIDIC conditions to carry out the control of the design and the supervision of the construction.

Ingerop/High Point Rendel, the Engineer, has also demanded additional EUR 6 M on top of the EUR 9 M it already received because of the delay of the project, for which the Bulgarian government is willing to blame the construction company.

"Why do we have to pay the Engineer if the builder is to blame for the delay?," asked the Deputy Chair of the Transport Committee Svilen Kraychev. Deputy Minister Moskovski said the government had no other choice.

Earlier on Thursday, the Presidents of Bulgaria and Romania declared Danube Bridge 2 should be ready by July 2011.