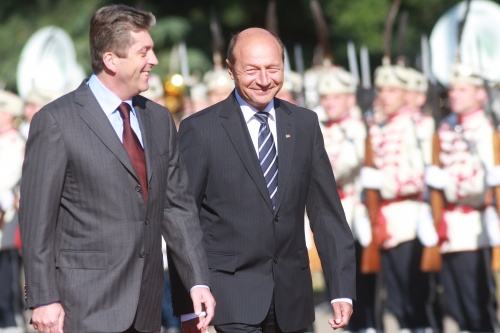 Bulgarian President Parvanov (left) and his Romanian counterpart Basescu (right) are smiling during the latter's former welcome in downtown Sofia. Photo by BGNES

The Presidents of Bulgaria and Romania have outlined several crucial priorities in the bilateral relations including large-scale joint projects with the EU Danube Strategy.

"One major point on which President Parvanov and I are totally unanimous is the Danube Strategy of the EU. We believe that the meeting in Bucharest in November, which will host the final talks, is a great opportunity to include in the agenda of the Danube Strategy the construction of one or two hydro power plants and one or two new bridges in the Bulgarian-Romanian section of the Danube," Basescu said during his joint news conference with the Bulgarian President on Thursday stressing that the issue of the expulsion of Bulgarian and Romanian Roma from France was by far not the only topic on their agenda.

The two heads of state said that both sides are expected to complete the construction of the second bridge on the Danube in the Bulgarian-Romanian section in June 2011, which is when the much anticipated bridge between Bulgaria's Vidin and Romania's Calafat (also known as "Danube Bridge 2") should become operational.

The only existing bridge on the Danube between Bulgaria and Romania at present is the one between Ruse and Giurgiu, the so called "Friendship Bridge" completed by the Soviet Union in 1954 under the auspices of Soviet dictator Joseph Stalin.

In addition to the Danube Strategy, the other joint priorities that Parvanov and Basescu agreed upon include the joint accession to the Schengen Agreement in 2011, which entails a vigorous focus on the fulfillment of the respective technical requirements.

President Basescu said he offered his Bulgarian counterpart to have the two governments consider the goal of ending the existence of the EU Cooperation and Verification Mechanism in 2011, i.e. the monitoring tool of the European Commission set up after Bulgaria and Romania's EU accession in 2007 to make sure that the two poorest and newest EU members make satisfactory progress in their problem areas, mostly fighting corruption and organized crime and executing judicial reform.

Bulgaria's President Parvanov in turn has pointed out that the two countries should focus more on their role with the EU on determining the policies of the Union. He is convinced that the expertise of the two nations with respect to the Western Balkans, the wider Black Sea region, and the common energy policy must be utilized and taken into account by Brussels.