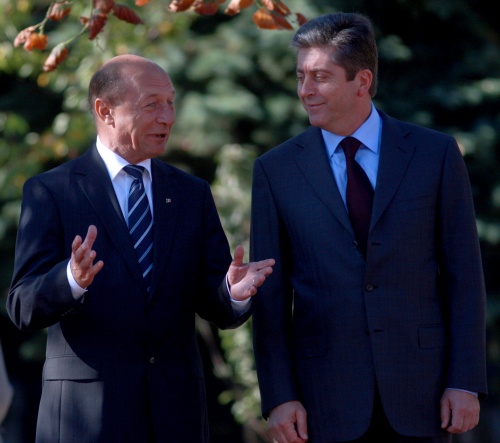 Romanian President Basescu (left) was welcomed in Sofia by his Bulgarian counterpart Parvanov (right) in Sofia. Photo by BGNES

Bulgarian President Georgi Parvanov, unlike Prime Minister Borisov, has expressed solidarity with Romania on the thorny issues of France's Roma expulsion and on the two nation's future Schengen Agreement accession.

Parvanov welcomed in Sofia Thursday his Romanian counterpart Traian Basescu, indirectly making it clear that his position on the problematic topics differed from that of his political opponent, the Prime Minister.

"As far as our upcoming accession to the Schengen Agreement is concerned, granted that we are meeting all requirements, we firmly oppose any attempts to make this process directly on indirectly conditional on the situation with the expelled Roma or the Cooperation and Verification Mechanism," Basescu told journalists in Sofia.

While Romania is willing to accept certain remarks with respect to the application of all pre-accession measures, it does not agree that the mechanism installed to monitor the post-accession progress of Romania and Bulgaria must have a reflection on their Schengen entry, he said.

"I have informed President Parvanov about my position and the position of the Romanian government with respect to the Roma issue in France. We cannot accept the restrictions of the freedom of movement of our citizens. Directive 28 from 2004 guarantees the freedom of movement of all EU citizens. Romania backs the strategy for the integration of the Roma on the European level. We underscore that the problem with the nomadic Roma is not just our problem. But we should also do away with any hypocrisy. Our citizens of Roma origin must obey the laws of the country in which they are. They should abide by the customs of the nation where they set up their camps," Basescu said in Sofia while also pointed out the special strategic relations between France and Romania and the hope that any bilateral issues will be sorted out.

"Our common position with President Basescu is that the Roma question must not be among the criteria for Schengen Entry. There is no way at all the topic about the integration of the minorities could be a matter of the Schengen requirements. And don't expect me to answer questions about Prime Minister Borisov," Parvanov declared in turn.

He reminded that the governments of Bulgaria and Romania are cooperating actively in order to meet all Schengen requirements.

"Of course, every country should be assessed individually. But the decision for that is not made in Sofia or Bucharest but in Brussels. We should cooperate as we did during our accession negotiations," stated the Bulgarian President.

In his words, the presidents and governments of the two nations do not need to come up with a joint statement on the Roma issue because they are going to work in the same direction anyway. He stressed his earlier statements that the matter refers to EU citizens, rather than citizens of Bulgaria and Romania.

"Whoever broke the law, must be sanctioned. But the sanctions cannot be issued with respect to an entire ethnic group," he declared while saying that the idea for setting up a special ministry for the Roma made little sense because today's issues had to do with many different spheres.

"I have shared my concern with President Basescu that this attack on the Roma issues adds new negative traits to the image of Bulgaria and Romania, and to the European society," he explained.

He expressed his fears that the “artificial blowing out of proportion” of the Roma problems would jeopardize Bulgaria’s chances to join the Schengen Agreement in 2011, and made it clear that Bulgaria wanted to stay away from the row among France, Romania, and the European Commission on the Roma.

“We are not a federation with Romania, and I don’t see why they have to view us together. Sarkozy promised me that Bulgaria will not viewed as an ingredient put in the “common pot.” Only a small fraction of the expelled Roma are Bulgarians, the majority are Romanians. Sarkozy said all citizens must abide by the laws, and everybody agreed with him – including the Romanian President and the Bulgarian Prime Minister,” Borisov said last week after the end of the EU Council meeting of the heads of state and government of the EU member states.

Borisov made world headlines after the meeting by leaking information that there was a huge row between French President Sarkozy and EC President Barroso with respect to the Roma issue.

As part of its campaign to crack down on Roma squatter communities around the country, France has expelled over 1000 Romanian citizens and 41 Bulgarian citizens, who technically agreed to leave voluntarily after they were paid EUR 300.

Bulgarian President Parvanov, a former chair of the Socialist Party, and Prime Minister Borisov, leader of the center-right GERB party, have been tangled in simmering conflicts over the past few months. Analysts point to them as the two main opposing political figures in any future elections in Bulgaria.