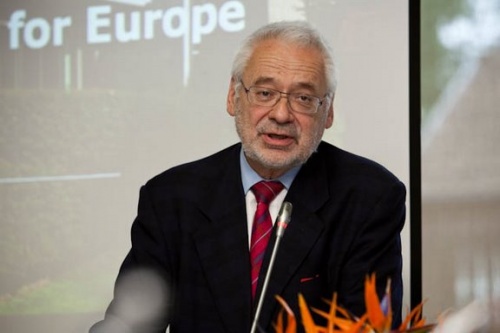 Interview of Novinite.com (Sofia News Agency) with renowned Austrian Politician Erhard Busek on the EU and the Danube Region.

Erhard Busek (born 25 March 1941 in Vienna, Austria) is a politician from the Christian-conservative People's Party (?VP).

From January 2002 until June 2008 Busek served as the Special Co-ordinator of the Stability Pact for South Eastern Europe, created in 1999 after the Kosovo War and including Albania, Bosnia and Herzegovina, Bulgaria, Croatia, Macedonia, Moldova, Romania, and later, Serbia and Montenegro, with the USA, EU/EFTA, Russia, Turkey, Japan as supporting partners and Ukraine as an observer.

Busek was the final person to hold the position as in 2008 the Pact was transformed into a Regional Cooperation Council.

At present he is Coordinator of the South-Eastern Cooperative Initiative (SECI) and Chairman of the Institute for Danube Region and Central Europe among other things.

Busek was chief of the People's and Vice-Chancellor of Austria in the coalition of the Social Democratic Party of Austria with the People's Party between 1991–1995 and was an important reformer of the Austrian Universities. He served as Austria's Minister of Education in the mid 1990s.

Busek was the keynote speaker at last week's conference on "Hate Speech and Stereotypes in the Media, Role of Media in Conflicts and War, and Professional Standards" of the South and East Europe Media Organization (SEEMO) that took place after the end of the 60th International Press Institute World Congress in Vienna.

More than 10 years after its founding, how do you view the impact of the Stability Pact for Southeastern Europe? Did it achieve its goals?

I think we did a lot concerning the economic situation, improving the decision-making on infrastructure, and also partly on security - both military and civil security. Politics was not our job but there were also some weaknesses in the work of the Stability Pact because of the areas we didn’t cover.

We were not allowed, for example, for a long time to do something on education, which is a mistake, because improvement of the situation is only possible by investment in education and development, and also concerning the health system.

I think the reason the Stability Pact for South-Eastern Europe was not allowed to enter these fields for a long time were the principles of the European Union because education and health is not a subject of European integration. But transformation and after-crisis management need some other priorities, and for sure, this is a pity.

I think that for the moment the situation in South-Eastern Europe is very good. The Regional Cooperation Council, which replaced the Stability Pact in 2008, is in place but I think the European Union should give more push to the countries in the region so that they would make some improvement on the ground. If the countries of the region are left alone, the decision-making is more difficult.

With respect to the Western Balkans, do you think that this part of Europe is already well on the road to integration, or should one expect still further tension and conflicts there?

It has to be said quite straight – there have always been fears that there will be new wars and so on. That has not happened. I think there is real stability in the region, and a tangible improvement. If some are saying, “The Balkans don’t make the headlines any more,” I think this is a very positive sign. If we are not in the headlines, this means that the problems have been minimized.

Yet, but taking into account the problems with Bosnia, Kosovo, Macedonia, is it certain that this progress is irreversible?

It is irreversible. I think that some people in the region, and outside the region have to realize that there is no going back. That's especially true with respect to border issues, and so on, which are still being questioned. I think our dear political friends in Serbia must learn that the current political situation is irreversible.

How can Serbia get over its loss of Kosovo?

The European chances are very well alive for Serbia. I have a full understanding that Serbia has to go a long way, because the changes for Serbia from being the major part of Yugoslavia to the present situation have been very difficult but they have to try it, and if they succeed, they will have even more influence than they had before. The danger is that Serbia is separating from the others and that's not helpful.

You are the Chair of the Institute for Danube Region and Central Europe. The EU has recently launched its Danube Strategy. In the way that it has been fashioned, do you think it has enough teeth?

For a very long time, since 2000, I have been fighting for the Danube Strategy with to no avail. Now for the first time I am more optimistic.

The reason for that is that the Directorate-General for Regional Policy of the EU is now responsible for the Danube Strategy. Thus, here you have some money, some structures for decision-making, and it is now up to the riparian countries of the Danube to develop the right proposals and projects that can be realized.

Trans-border cooperation is of extreme importance because it is lacking. I will give you some primitive examples: the problems between Hungary and Slovakia, the fact that there is only one bridge between Romania and Bulgaria, and so on. If we manage to change these attitudes, the Danube Region initiative will be a success story.

As far as regional cooperation in Eastern and South-Eastern Europe is concerned, there are great hopes in Bulgaria with respect to the Pan European Transport Corridor No.8, i.e. the so called TRACECA Program. From your point of view what is necessary to get it trans-continental highway moving?

First of all, there must be more pressure on part of the concerned countries. Second, it will be very helpful if they are actually starting some things in this direction, and not only speaking about it, but moving step by step towards their realization.

If we look, for example, at the railway connection between Sofia and Skopje, I think it has to be completed even if it is expensive. But these are necessary projects whose realization will also bring a lot of investment to these countries – Bulgaria, Macedonia, Albania.

Since you mentioned the Sofia-Skopje railroad, its fate reminds that of other trans-border infrastructure projects which were key for the region when NATO was in Kosovo in 1999, such as the second bridge on the Danube. But once the situation in Kosovo got kind-of settled, these projects literally died. Why do you think that is?

The second bridge on the Danube between Romania and Bulgaria has been a story of mishandling. It was not prepared the right way, they did not know who owned the land, then there was the tender, the decision-making was quite poor. But the thing about all these projects is that the money exists. So they be put forth and should be started.

What is your view on the Roma in Europe issue? Should the EU and the member states handle it differently?

I don't think it can be handled by the EU alone. If something is to be done about the Roma on education, it has to be done by the nation state.

You can ask for EU assistance but I don't think it is so much a question of money as it is a question of having the right persons to do the job, and to be committed properly to it. This has to be done in cooperation. What I have seen so far is that every single member state is happy to shift the issue it to the EU.

You have mentioned that the people of the EU need European TV talks shows. Is the European identity going to work out?

Yes, there is “more” European identity in existence than we imagine. If we are look at arts, music, both classical and music of the younger generation, literature and architecture, economy; I think only politics is falling behind.

There has been much talk about an EU rift between “old” and “new” Europe, i.e. Franco-Germany vs. Poland and Eastern Europe plus the UK. How real is this rift, and can it undermined the EU as an entity?

Yes, it can but only if the politicians are working to open such a rift. Because it makes little sense today to say that the EU is only moving if the French and the Germans are cooperating.

In Central Europe we have a huge number of member states of the EU that are sometimes more European than the bigger states. We should cooperate on this subject. It is a full nonsense to think that only Franco-German cooperation is the driving force.

The driving force of the EU is all of us together. If France and Germany are ever making arrangements at the cost of the others, I think this is totally wrong and detrimental to everybody.