Last of at Large Bulgarian 'Killers' Back in Jail 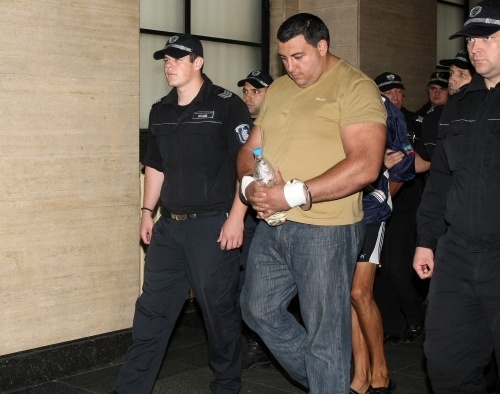 The President of the Bulgarian Sumo Federation, Petar Stoyanov aka the Chieftain has persistently denied involvement in high-profile murders for hire. Photo by BGNES

The President of the Bulgarian Sumo Federation, Petar Stoyanov aka the Chieftain, has been arrested late Tuesday night, Interior Minister, Tsvetan Tsvetanov, informs.

The Minister announced the police have enough evidence the Chieftain, who is also a former Sumo national team competitor, is connected with the murder of businessman Rumen Rachev last summer in the northern city of Shumen.

Tsvetan said the other suspect in the murder is Vasil Kostov aka Vasko Ketsa (The Sneaker).

After the arrest, Stoyanov had been taken to the hospital for a health test. During the first three-day detention, it was reported Stoyanov's health worsened and he had to be taken to the hospital. According to his lawyer, he was close to a heart attack and had dangerously high blood pressure.

On August 3, 2010, the Appellate Court released 4 of them, including the Chieftain and Ketsa, over lack of evidence, and left under arrest only Medoti Ivanov, on charges of illegal gun ownership.

On August 9, one of the 4 – Georgi Petkov aka Dachi was arrested on different charges.