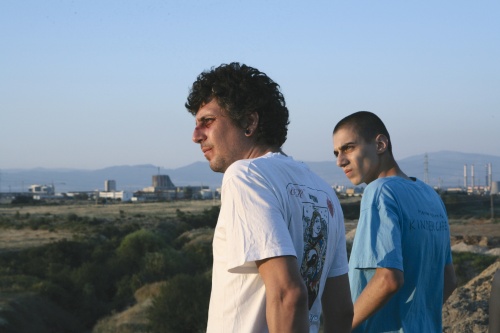 Hristo and Georgi, the two main characters in Eastern Plays shown here staring at the outskirts of Sofia. Photo by BGNES

Bulgaria's National Film Center has put forth "Eastern Plays" as the Bulgarian nomination for the US Academy Award for Best Foreign Language Film.

"Eastern Plays", which is the debut feature film of director Kamen Kalev, has been chosen as the Bulgarian competitor for an Oscar for international film after it achieved a sweeping success not only in Bulgaria but also abroad in the fall of 2009 and the spring of 2010.

"Eastern Plays" won the award for best movie for 2009 of the Bulgarian Film Academy. The movie director, Kamen Kalev, was also awarded for best director and for a debut in feature film.

This is one of the many awards "Eastern Plays" has won in Bulgaria, as well as in international film festivals, including the Sofia, Bratislava, Warsaw and Las Palmas International Film Festivals.

The movie was the first Bulgarian movie in the last 20 years to be selected at the Cannes Film Festival in 2009.

Kamen Kalev was born in Plovdiv, Bulgaria in 1975. He studied film making in Paris, and has directed and produced several award-winning short movies. He has also produced more than 60 commercials and music videos.

This film "Eastern Plays" also won awards for best director and best actor at the Tokyo Film Festival in October 2009. Hristo Hristov, the winning actor, sadly died shortly before the completion of shooting. The film is dedicated to him as he is a lifelong friend of Kalev's.

"Eastern Plays" is about two brothers who had lost all contact and were suddenly brought together when they took opposite sides in a racist beating between neo-Nazis and a Turkish family. Both have personal dilemmas to resolve, and realize that only by reuniting would they both be able to assess what they really wanted from life.

Bulgaria's largest success so far in the Oscar nominations for best foreign language film was the placement of "The World Is Big and Salvation Lurks Around the Corner" among the top 9 films, of which five were selected as the final nominees.

The decision about the 2010 Oscar nominations for best foreign language film will be clear at the beginning of 2011.