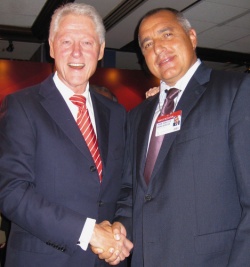 Borisov attended the annual meeting of "Clinton's Global Initiative", the foundation of the former American President.

Bill Clinton has assessed highly Bulgaria's role for the stabilization of Southeast Europe, including with respect to the status of the newest Balkan republic Kosovo, according to the press center of the Council of Ministers.

Bulgaria's Prime Minister Borisov is on a week-long visit to New York City for the 65th regular session of the UN General Assembly and for the UN summit on the Millenium Development Goals .

On Wednesday, Borisov will speak at the plenary session of the UN summit on the Millenium Development Goals.