Bulgaria Celebrates 70 Years since Return of Southern Dobrudzha from Romania 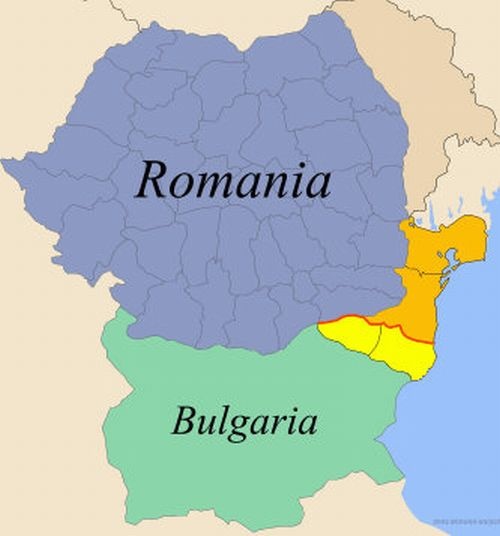 Bulgaria celebrated 70 years since recovering Southern Dobrudzha (in yellow) from Romania with the Treaty of Craiova in 1940. Map by Wikipedia

Bulgaria has celebrated 70 years since the signing of the Treaty of Craiova, which restored Bulgarian sovereignty over the region of Southern Dobrudzha occupied by Romania after World War I.

The Treaty of Craiova was signed on September 7, 1940 between the Kingdom of Bulgaria and the Kingdom of Romania. Under the terms of this treaty, Romania returned the southern part of the region of Dobruzha (today’s Northeastern Bulgarian) to Bulgaria and agreed to participate in the organization of a population exchange.

The treaty was approved by all major international powers Germany, the United Kingdom, the Soviet Union, Italy, USA, and France.

From the Middle Ages until the late 19th century the entire region of Dobrudzha – the narrow piece of land between the Black Sea and the Danube River – was considered part of the territories with predominantly Bulgarian population even though it also included Turkish, Tatar and Gagauz population.

Under the San Stefanov Treaty between the Russian Empire and Ottoman Turkey, which restored the Bulgarian state on March 3, 1878, the northern half of Dobrudzha was granted to Romania in exchange for its participation on the Russian side in the Russian-Turkish War of 1877-78, and as a compensation for the Russian occupation of the region of Bessarabia (roughly today’s Moldova).

During the Second Balkan War in 1913, Romania intervened against Bulgaria on the side of Serbia and Greece, annexing Southern Dobrudzha under the Treaty of Bucharest. Subsequently, in 1916, after Romania joined the Entente in World War I, Bulgaria, which was an ally of the Central Powers, waged a successful war campaign against the Romanian, Russian, and Serbo-Croatian forces conquering the entire territory of Dobrudzha as well as the Romanian capital Bucharest (together with forces of Germany and Austria-Hungary).

Under the Treaty of Neuilly, which Bulgaria singed with the Entente after World War I, it ceded all of Dobrudzha to Romania despite the fact that it was almost entirely populated by ethnic Bulgarians. Subsequently, the regaining of Southern Dobrudzha (and of Aegean Thrace) became a major goal of the Bulgarian diplomacy between the two world wars.

This goal was achieved with the sanctions of the major world powers in 1940 of the Treaty of Craiova, which set the current land border between Bulgaria and Romania.

With this treaty both Bulgaria and Romania renounced any further territorial disputes.

The terms of the Treaty provided for the mandatory exchange of Romanian citizens with Bulgarian national origin historically living in Romania-ruled Northern Dobrudzha and the Romanians living in Southern Dobrudzha, which were almost entirely colonists settled there to assimilate the local population after 1913-1919.

Thus, some 80 000 Romanian colonists left Southern Dobruja resettling in the northern part, while 65 000 Bulgarians from the northern part had to leave their homes and resettle in Bulgaria.

The anniversary since the re-accession of Southern Dobrudzha to Bulgaria and the end of the Romanian occupation of the region was celebrated on September 21, 2010, with a number of events in the cities and towns in the northeastern part of the country – Dobrich, Varna, Silistra, Balchik, Kavarna, Tutrakan, General Toshevo - including many folklore presentations by descendants of the Bulgarians who left Northern Dobrudzha.

The art gallery in the city of Dobrich will be presenting the original of the Treaty of Craiova in an exhibition opening on September 24, 2010, entitled “Borders and Fate. Dobrudzha in 1940.” The original document has been provided by the Central Archives Directorate in Sofia.