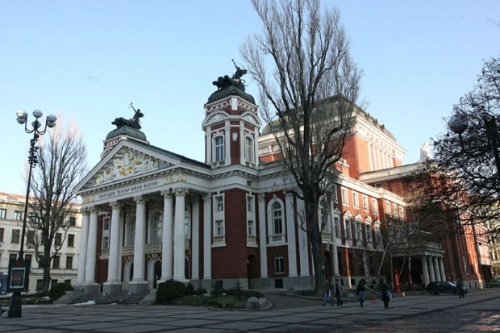 The Bulgarian cabinet recently adopted a decree to merge a number of theaters with most high-profile one bringing together two top Sofia venues - the Salza i Smiah (Tear and Laughter) theater and the National Theater (picture). File Photo

Bulgarian Artists' and Intellectuals' Unions are filing a complaint with the European Commission against the culture policy of the cabinet which they have qualified as genocide, the Bulgarian news agency BTA informs Tuesday.

The declaration has been sent to the Speaker of the Parliament, the Prime Minister, the Ministers of Finance and Culture.

"After numerous futile open letters to the legislative and executive power regarding the drastically carried out genocide policy towards culture, the arts, science and education in Bulgaria, we declare that the 3-year (2011 – 2013) budget forecast of the Culture Ministry is just another proof for this genocide. Our consciousness and our responsibilities before the Bulgarian nation do not allow us to agree with this harmful policy – harmful today and harmful tomorrow for the spiritual and moral health of our already quite ill society," the declaration reads.

The letter further points out the executive power must be held legally responsible as are all individuals in a democratic country for violating laws such as the Movie Industry Act and the Culture Sector Act.

The authors warn they would undertake all necessary actions and measures to notify the EC, the European Parliament and the European Court about the dangerous Bulgarian policy contradicting all EU basic understandings of the importance of culture.

The declaration has been signed by the Presidents of the Movie Makers Union, the Writers Union, the Performing Artists Union, the Associations of Film Directors, Movie Producers, Screenwriters, Cameramen, Independent Artists and Animation Artists, the Union of the Movie and TV Directors, the Director of the Observatory of Cultural Economics.