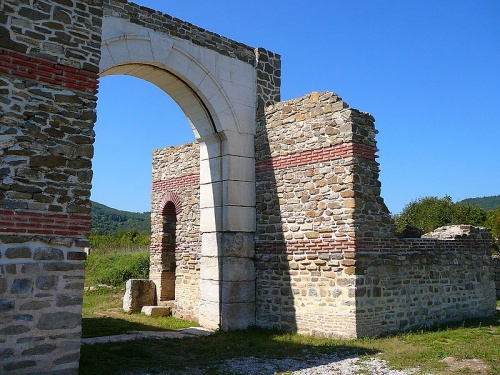 The eastern gate of the Sostra fortress near Troyan. Photo by Wikipedia

A team of archaeologists from the Bulgarian National History Museum has uncovered a highway dating back to the zenith of the Roman Empire.

The archaeologists led by Dr. Ivan Hristov have been excavating the fortress of Sostra, an Ancient Roman horse-changing station along the highway in question, since the beginning of September.

It is located near the village of Lomets, close to the town of Troyan in the Stara Planina mountain.

They have unearthed a section of the Roman road connecting Ulpia Oescus, a Roman town on the Danube near today's Bulgarian village of Gigen, with Philipopolis (today's Plovdiv), crossing the Balkan (Stara Planina) range.

The Ancient Roman highway is seven meters wide, and is the best preserved Roman road ever found in Bulgaria; it is made of large stone slabs, and has been described by the Bulgarian archaeologists as "a real highway of the Antiquity."

In the 4th century the above-mentioned highway was crucial for the Roman Empire as it connected its Balkan lands with its territories north of the Danube. This is where Emperor Constantine I the Great built the largest river bridge in ancient times, Constantine's Bridge on the Danube, which was 2.5 km long, 6 meters wide, and existed in 328 AD - ca. 355 AD.

(The "next" bridge (today's Ruse-Giurgiu Bridge) on the Lower Danube, in the Bulgarian-Romanian section of the river was built only in 1954, about 1 600 years later, at the initiative of the Soviet dictator Joseph Stalin.)

Another crucial finding of the team is the uncovering of the earliest stone wall of the Sostra fortress constructed by the soldiers of the "Second Matiac Cohort", an Ancient Roman unit of 1000 soldiers, in the middle of the 2nd century. The wall was 2 meters thick, and secured an area of 19 decares.

This first erection of Sostra was ordered by Emperor Antonius Pius in 147 AD, which is confirmed by a stone inscription found inside the fortress.

In addition to the fortress wall, the archaeologists also found the fort's moat – which was 2 meters deep and 5 meters wide.

The visitors of the archaeology site can view the preserved part of the fortress – which consists mostly of the upgraded wall constructed in the 3rd century as well as several buildings inside its perimeter including the early Christian basilica "St. George" dated to the 5th century.

After working on the Sostra fortress till September 24, Ivan Hristov's team will start excavating the site of the residence of the Ancient Thracian rulers at the Kozi Gramadi mount in the Sredna Gora mountain.