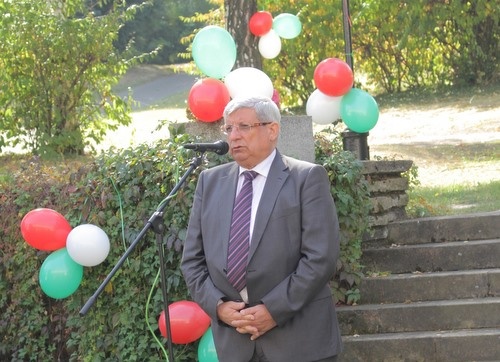 Bulgarian Defense Minister Angelov speaking at the start of the school year for the kids of diceased military officers. Photo by BGNES

Speaking on Sunday, two days after the National Security Council chaired by President Parvanov reached a much hailed political consensus on the draft document, Angelov praised the agreement among the major political forces, and declared that as soon as some corrections are added, the Strategy should be thrown in the hands of Parliament for debating and voting.

"The Strategy covers the period till 2020. We have achieved a great harmony with the future Strategic Concept of NATO. This is the first document that provides a close to the optimal definition of "national interests". This definition could have been even more precise but a wider option has been selected in order to avoid political confrontation," Gen. Angelov explained.

"We should not make wrong conclusions from the contents of draft National Security Strategy – such as concluding that the Bulgarian armed forces can protect the country in a large-scale military conflict on their own, and without NATO's collective security system," he said.

In his words, the only time in the modern era when the Bulgarian armed forces managed to win a war on their own was the Serbian-Bulgarian War of 1885.

Angelov practically disputed the belief of President Georgi Parvanov that the Bulgarian armed forces must be able to defend the country's territorial integrity and sovereignty on their own.

“I personally think that Bulgaria must stick to the US missile shield in Europe because if there is any kind of realistic military threat for the country, it will come through air, not land or sea. It is a whole other topic if such a threat would translate into an actual attack or if somebody somewhere is just planning to strike strategic objects on Bulgarian territory,” explained the Minister.

"Our commitment to active participation in the missile defense of the US and NATO in Europe must be part of the Strategy. Bulgaria must indeed have strong defense within the limits of what it can actually afford," stated the Defense Minister.

Angelov further praised the fact that corruption and organized crime have been outlined as security risks as has been the "illiteracy among certain minority groups", apparently meaning the Roma.

He believes the integrity of the Bulgarian nation must be a primary task of the new National Security Strategy.