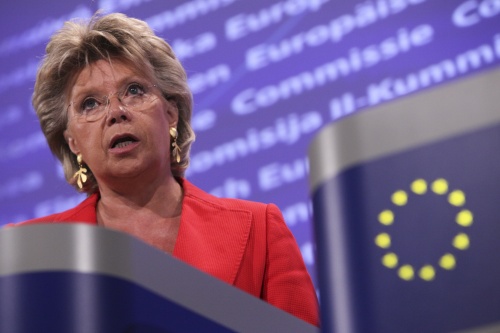 The European Union should act if the European Commission establishes that France has broken European law with its deportations of Roma, EU Justice Commissioner Viviane Reding said on Friday, but declined to say what measures these could be.

"At the moment the Commission is carrying out an investigation of France, where authorities are unfortunately suspected of... taking decisions directed against an ethnic minority, the Roma," Reding said in a speech in Berlin.

"If these suspicions are confirmed, then the Commission, as guardian of (EU) treaties, must assume its role," Reding said in a speech in Berlin. "And it will do so."

Earlier this week Viviane Reding threatened the European Commission is considering legal action against France over its deportations of Roma, which she called a "disgrace".

The case would then go before the European Court of Justice in Luxembourg, she said.

The Commissioner was heavily criticized in France and Germany after she appeared to compare France's actions to persecutions in Nazi-occupied France.

Reding later said she regretted interpretations of her statement.