Bulgarian Textile Industry Up by 18-22% for 2 Months 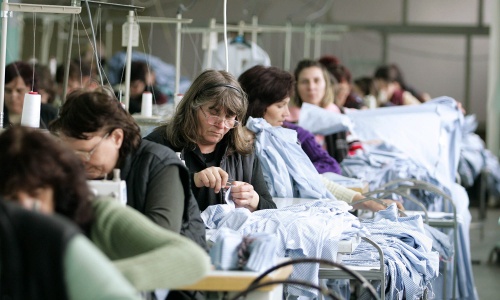 According to the VP of the Bulgarian Association of Apparel and Textile Producers and Exporters, Bertram Rollmann, the textile industry in the country went up by 18-22% for the past two months. Photo by BGNES

Representatives of the Bulgarian textile industry have stated they have been overwhelmed with orders and they had to turn down some of them due to lack of capacity.

The Bulgarian Association of Apparel and Textile Producers and Exporters has forecast a strong season and is expecting revenues, comparable to those of 2008, the Bulgarian National Radio has reported.

The VP of the Association, Bertram Rollmann, has stated that the orders in the sector increased by 18-22% for the past two months.

"The problem is the lack of employees we lost during the crisis. The textile industry in Bulgaria could employ up to 30,000 people in the next year," Rollmann said.

He has expressed his hope that in the next 5-10 years Bulgaria will have a very competitive "Textile and Clothing" sector because, in his words, it would also be very important for the development of the Bulgarian economy.

According to Rollmann, Europe is expecting Bulgaria and the Balkans to have a key role in the industry of clothing production for the EU.