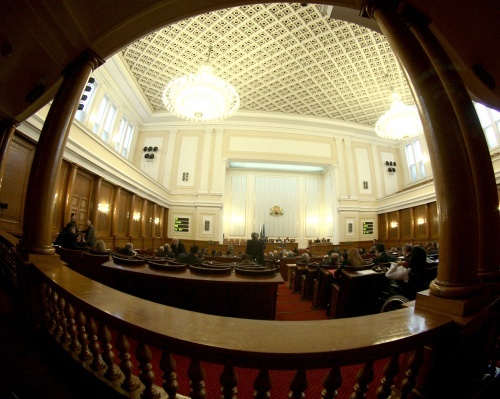 The plenary hall of the Bulgarian National Assembly. Photo by BGNES.

Issues to be cleared are still outstanding in the bill for new electoral legislation in Bulgaria, currently discussed by an ad hoc committee in Parliament.

The committee was created to draft a comprehensive "Electoral Code," to include rules on conducting all elections in the country – parliamentary, presidential, European and municipal.

The bill is expected to be tabled to plenary during the fall, and it has been the ambition of Speaker Tsetska Tsacheva for it to be voted by Christmas recession.

It appears that only MPs from the ruling GERB party and its nationalist allies Ataka are ready to sign the draft. Opposition Socialist Party and Movement for Rights and Freedoms, as well as rightist Blue Coalition, which usually supports GERB, can well vote 'against.'

This is bad for GERB, as the committee is composed on an equality principle, with each of the 5 political groups having three representatives.

MPs comment that GERB might thus decide to transfer the Electoral Code bill to the Legal Affairs Committee, which is based on the proportional principle and in which GERB thus has majority.

The Blue Coalition is against because of disregard for its idea for electronic voting. The threshold for the preference vote is also a matter of dispute.

Socialists, on their part, see the new procedure of registering parties for elections as problematic and non-transparent.

The Movement for Rights and Freedoms strongly contests an innovation that would mandate for voters to vote only at their address of residence.  This so-called "principle of settlement" has been introduced in a more limited form in the past to limit so-called "electoral tourism," which allegedly saw some persons voting twice in two different towns.

Some parts of the population and politicians also see as adverse the massive voting on the part of Turkish ?migr?s from Bulgaria in Turkey, but the suggestion that Bulgarian citizens abroad vote only in diplomatic missions was dropped.

Municipal and presidential elections in 2011 are likely to be held on one day, probably end of October. Whether they must be on one day is also a matter of political dispute.

The new electoral code must integrate the principles for conducting elections in Bulgaria.

The proportional system (Hare-Niemeyer) with preferential voting will be used for parliamentary and European elections. This means that the contested "majority voting element" introduced for the last general elections will be eliminated.