French Ambassador to Bulgaria: We Direct Roma to Their Relatives 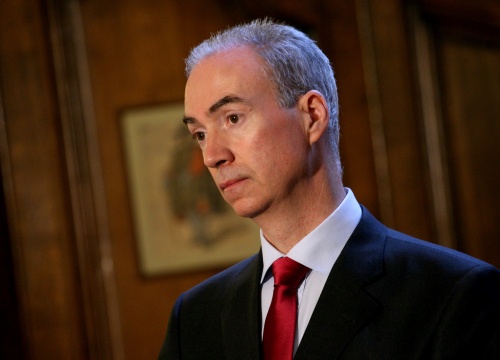 The French Ambassador to Bulgaria, Etienne de Poncins, has explained that France is not deporting, but rather "directing to their relatives" the people who have violated the French laws. Photo by BGNES

The French Ambassador to Bulgaria, Etienne de Poncins, has stated that France is not deporting, but rather "directing to their relatives" the Roma citizens from Bulgaria and Romania.

"I am outraged at the word "deport"," Poncins said Monday in an interview for the Bulgarian National Television.

He has explained that the measures taken by France for the expulsion of the Roma citizens to their homelands should not be considered deporting, but rather "directing to their relatives" of the people who have violated the country's laws.

The Ambassador has explained that whoever wants to stay more than three months in France should meet certain criteria.

"There is no double standard in the French legislation," Poncins said and noted that Bulgarians, as well as all the other citizens of the EU, have the right to free passige within its borders, but have to comply with the requirements if they want to stay longer.

Poncins also pointed out that the expatriated Roma were not many, only scores of people, and that his country was very generous towards them. According to the Foreign Ministry, the people have left at their own will against EUR 300 per adult and EUR 100 per child, as assistance from the French government.

According to the French Ambassador, the main problem is the integration of Roma in Bulgaria. He explained that he has visited several Roma neighborhoods and the conditions there have been extremely bad.

"Bulgaria receives and will receive many funds for the integration of Roma and should use them effectively," Poncins said.

He added that Bulgarians and French should demand from the European Commission an overall strategy for the integration of the Roma.

The resolution, presented by socialist, liberal, green and hard-left groups, was approved with 377 votes in favour, 245 against and 51 abstentions.

EU lawmakers expressed "deep concern" for measures "taken by French authorities and by other (EU) member states authorities" and urged "those authorities immediately to suspend all expulsions of Roma."

The also called on the EU's executive, the European Commission, on the Council of EU states and on individual EU governments "to intervene with the same request."

The European Commission has been accused of failing to protect members of the Roma community deported from France. Euro MPs demand to know if Paris has broken any laws, warning that other countries might take similar action.

French officials have said the deportations are part of a broader crackdown on illegal immigration. Additional chartered flights have been scheduled for September.