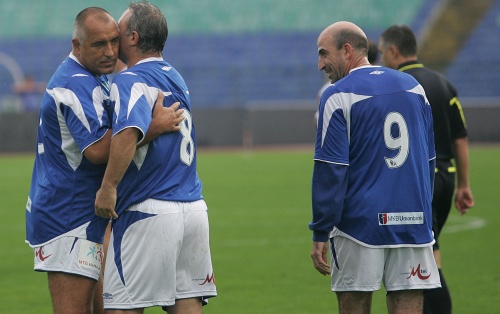 A team of Bulgaria's football stars and PM Borisov have defeated the team of Europe in a charity football match.

The Bulgarian stars beat Europe 7:0 in Sofia Thursday night in a match organized for a second year in a row by the Swedish owner of the Nova TV channel MTG.

The team of Europe was led by Hans-Holler Albrecht, the German President and CEO of the Swedish-based European broadcasting group Modern Times Group MTG AB, and also included the legendary Welsh striker of Liverpool Ian Rush.

The Bulgarian stars' team included several of Bulgaria's legendary footballers from the 1990s who won the bronze in the 1994 USA World Cup: Hristo Stoichkov, Krasimir Balakov, and Yordan Lechkov.

The score was opened by Stoichkov in the first half. In the second, the Bulgarian stars scored the other six goals, including two by the Prime Minister.

About 3 000 spectators bought BGN 5 tickets for the charity match whose proceeds will go to scholarships for orphans studying at sports high schools across the country.