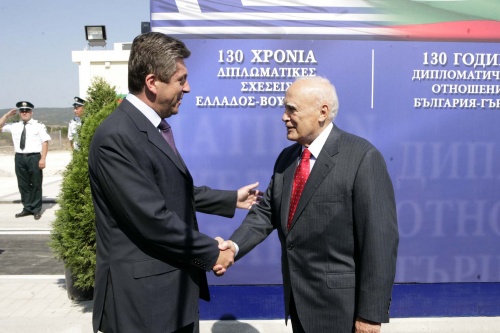 Bulgarian President Parvanov (left) and his Greek counterpart Karolos Papoulias at the opening of the new border crossing and the celerations for the 130 anniversary since the establishing of diplomatic relations. Photo by BGNES

The Presidents of Bulgaria and Greece, Georgi Parvanov and Karolos Papoulias, have hailed the opening of a new border crossing as a boost to bilateral tourism and investment ties.

Parvanov and Papoulias formally opened the Ivaylovgrad-Kyprinos border crossing close to Bulgaria's Kardzhali and Greece's Alexandroupolis as part of the celebrations of the 130th anniversary since the establishment of diplomatic relations between the two countries.

"I expect that this new border crossing will help the bilateral exchange of tourists between Bulgaria and Greece to go way beyond the 1 million people that we have been trying to reach. It will also help Greece continue to be a top foreign investor in Bulgaria," President Georgi Parvanov stated during the ceremony.

"In the last 7 years we, the state leaders in the Balkans, have held the forum of cultural corridors. For the first time on the Balkans culture has been a matter bringing nations closer together rather setting them apart," he stated.

The Bulgarian Presidency said the idea for the opening of the Ivaylovgrad-Kyprinos border crossing belongs to the present Greek President Karolos Papoulias, and dates back 14 years ago, when he was the Foreign Minister of Greece.

The construction of the new border crossing is expected to facilitate the regional connections in the area where the borders of Bulgaria, Greece, and Turkey come together.

The opening of the new border crossing was announced at the end of July at the first ever joint sitting of the Cabinets of Bulgaria and Greece.

Parvanov and Papandreou confirmed the upcoming opening of the Ivaylovgrad- Kyprinos border crossing point located in the south of Bulgaria and in the very northeast of Greece.

This will be the fifth crossing on the 493-km long Bulgarian-Greek border, which already has four border crossings – Kulata-Promachonas, Ilinden-Exochi, Svilengrad-Ormenio, and Zlatograd-Thermes.

The last one is only for cars and was opened in January 2010 by the two Prime Ministers Boyko Borisov and George Papandreou.