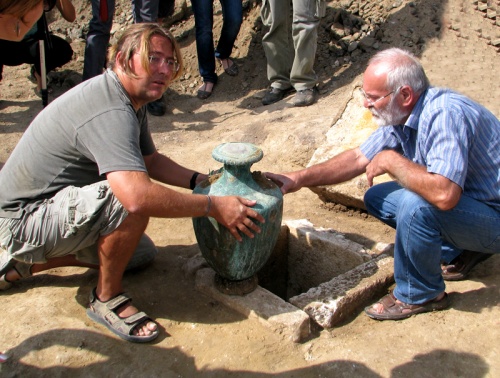 An ancient hydria, about 24-centuries-old, has been discovered in the Bulgarian Black Sea city of Nessebar on Thursday. Photo by BGNES

Bulgarian archaeologists have found a bronze hydria in a tomb dating back to 4th century BC during excavations in the Necropolis of Mesambria in the Black Sea city of Nessebar.

The archaeologists, who opened the tomb on Thursday, have explained that the hydria was an ancient vessel for storing liquids like water, wine or a mix of water and wine. The discovered object has three handles with exquisite detailed decoration on them.

According to the scientists, the hydria they found has been used for storing the remains of a dead person who had been cremated first. In their words, the fact that the object is very well preserved and does not need any restoration makes it valuable.

The hydria is the first object of this kind to be found in excavations around Nessebar. It would help archaeologists study the funeral rituals of the ancient people who lived in these places.

"I have to note that these hydrias were a rarity in the ancient world. They have been made by very crafty masters. They usually have applications on them and are owned by the biggest museums in the world. We are very happy that such a hydria would be presented in the museum in Nesebar," said Aneliya Bozhkova, co-head of the archaeology team doing the excavations.

After the hydria was taken out of the tomb, the archaeologists also found a very well preserved application, which had initially been on the vessels but had come off in time.

The application has a big emboss and features images of a male and a female figures, both with wings. The archaeologists believe that the images might come from the Greek mythology but are yet to prove this thesis.

"The discovery is extremely interesting and important for several reasons. The first is the fact that the cremation was a very rare funeral ritual in the Necropolis of Mesembria, as well as in the other ancient Greek necropolises in the Black Sea area," said Bozhkova.

She has explained that the scientists have the opportunity to study the ancient ritual and to follow all of its stages.

"The second reason is the fact that the the object has been used as a funeral urn for storing the remains of the dead," she added.

Petya Kiyashkina, co-head of the archaeology team and head of the museum "Ancient Nessebar", has also expressed her excitement that they have found a bronze object of this kind. She added that the museum of Nessebar currently has three hydrias but newly discovered one would give them the opportunity to study the funeral ritual.

Minutes after taking the object out of the tomb, the scientists found inside an object that ancient men used in order to clean their bodies after physical activities, making archaeologists believe that the dead person in the urn had been a man.