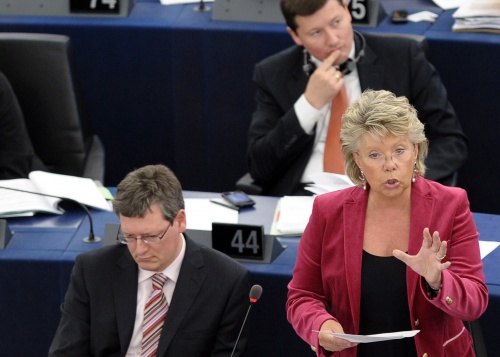 European Commissioner in charge of Justice, fundamental rights and citizenship Viviane Reding (R), delivers a speech concerning the situation of the Roma across Europe during the plenary session of the EP in Strasbourg, 07 Sept 2010 Photo by EPA/BGNES

The European Commission did not issue Tuesday a much anticipated response to the question if France is violating EU law with its expulsion of dozens of Bulgarian and Romanian Roma to their home countries.

During a fiery debate the European Parliament on the issue, European Commissioner for Justice, Fundamental Rights and Citizenship, announced only that the EC is studying the policies in France.

In her words, the respective departments of the European Commission are examining the facts and are requesting additional information from France about the Roma expulsion, reported the Brussels correspondent of the Bulgarian National Radio.

She pointed out that even though the Commission had not come up with a position on the Roma question yet, it has in the meantime adopted a series of measures to improve the situation of the Roma communities in the EU.

Reding suffered immense criticism on part of the Socialists, Liberals and Greens in the EP for failing to take a stance on whether the French policies with respect to the Roma squatters are a violation of the EU Charter of Fundamental Rights.

The Commissioner restricted herself to making two points. First, that every single EU member state is responsible for the public order and security of its citizens, and therefore can undertake measures against people deemed a threat to these values in spite of the freedom of movement in the EU; second, that no EU citizen can be the object of repression based on their ethnic or national self-determination.

Reding further explained that earlier on Tuesday the EC had made a decision to monitor how every single EU member state upholds the freedom of movement of people.

In addition, the Commission has moved to come up with a special working group in order to study the effectiveness of use of EU funds destined to help for the integration of the Roma. The latter decision has been motivated by doubts that these funds have not been absorbed properly.

The devastating criticism during Tuesday's EP debate on the Roma issue was directed not just against Commissioner Reding but also against EC President Jose Manuel Barroso, French President Nicola Sarkozy and the French government.

A large number of MEPs, mostly Socialists, Liberals, and Greens, defined France’s policies with respect to the Roma as “unacceptable.”

The leader of the European Socialists and Democrats Martin Schulz described them as a “witch hunt” and slammed Barroso for keeping quiet on the issue until Tuesday.

Schulz did not shy away from calling the French Roma deportation “racism” and “xenophobia.”

The leader of the European Liberals Guy Verhofstadt condemned the Roma deportation as a “succumbing to populist and sometimes racist temptation” not just in France but also in other EU member states.

The leader of the Greens in the EP, Daniel Cohn-Bendit said France’s policies towards the Roma are contradicting the treaties of the EU.

At the beginning of the debate President of the European Commission Manuel Baroso called for level-headedness in the controversy around the issue of EU Roma integration in his first-time "State of the Union" address in the European Parliament.

"Everyone in Europe must respect the law, and the governments must respect human rights, including those of minorities. Racism and xenophobia have no place in Europe,” he said.

As the EP Roma debate was going on, the local authorities in the Italian capital Rome announced that they have started demolishing illegal Roma camps in and around the city.

On Monday, a day before the EP debate, a much expected immigration summit of several EU countries and Canada in Paris made no mention of the recent campaign of the French government to crack down on Roma immigrants from Bulgaria and Romania.

At a news conference after the summit, however, French Immigration Minister Eric Besson practically denied the existence of a "Roma deportation".

As French Immigration Minister Besson made it clear after the Paris Summit on Monday, the French government time and again demonstrated it is reluctant to style its actions as "deportation", saying that Roma people are leaving the country by mutual agreement and for a compensation (EUR 300 per adult, EUR 100 per child), and also retain the right to return whenever they might wish.

At the beginning of August, France began a high-profile campaign of dismantling large numbers of illegal Roma camps in a move announced by President Nicolas Sarkozy.

The mass expulsions have drawn criticism from the international community, the Vatican and the UN. During the past week, European Commission also criticized France saying it did not put enough emphasis on individual circumstances.

Sarkozy also faces opposition from his own cabinet with Prime Minister Francois Fillon hinting he disliked the crude links being made between foreigners and crime, while Foreign Minister Bernard Kouchner said he considered resigning over the issue.

The deportations saw 1 000 Roma returned to Romania and Bulgaria last month while 11 000 were expelled from France last year, according to BBC.

France insists the deportations are not contradicting EU laws, including the free movement of people.

Under EU rules, the State can expel people who have been in the country for at least three months without a job and/or are deemed to be a threat to public security.