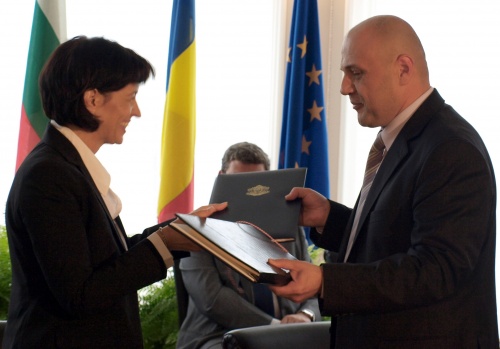 Bulgaria's EU Funds Minister, Tomislav Donchev, and Doris Leuthard, President of the Swiss Confederation (l) signed in Bern the frame agreement under the Bulgarian-Swiss program for Cooperation. Photo by BGNES

Switzerland will grant to Bulgaria assistance in the amount of BGN 106.5 M for projects in four sectors whose realization is to begin in December, 2010.

The news was announced Tuesday by the Bulgarian cabinet's press center. The funds will be used in the sectors "Security, Stability and Reform Support," "Environment and Infrastructure," "Encouragement of the Private Sector," and "Human Resources Development."

The frame agreement under the Bulgarian-Swiss program for Cooperation was signed Tuesday in Bern by Bulgaria's EU Funds Minister, Tomislav Donchev, and Doris Leuthard, President of the Swiss Confederation.

At the ceremony, Leuthard pointed out the financial aid is a symbol of solidarity on the part of Switzerland with Bulgaria as a new EU Member State, while Donchev offered gratitude, saying Bulgaria values highly the help' and hopes it would become the base of even further development of bilateral relations.

The Bulgarian-Swiss program for Cooperation is part of the Memorandum for Understanding signed in 2006 by the Council of EU and Federal Council of the Swiss Confederation.

During his trip, Donchev also visited the country's fastest developing municipality of Koniz, where he discussed opportunities for state and local collaboration and partenrship.