Bulgarian Bishop Hands Medals to 'Defenders of Christianity' from Gays 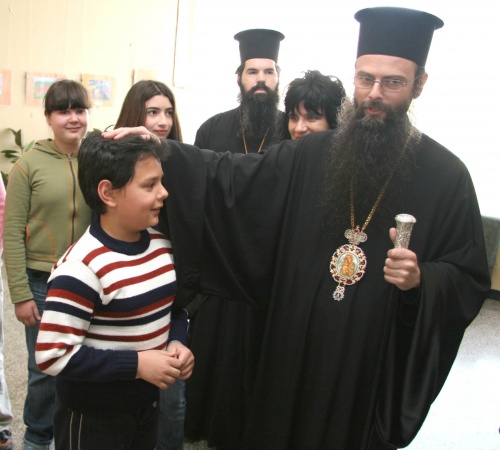 Plovdiv Bishop Nikolay (right) has declared the Sofia Pride gay parade an epitome of depravity and sin. Photo by BGNES

The bishop of Bulgaria's Plovdiv, Nikolay, has presented orders for "defending" Christian values to a controversial mayor and a notorious prosecutor, who were recently involved with anti-gay policies.

Bulgarian Orthodox Church bishop Nikolay, who is known for his hardline stance on religion issues, has given the highest order of the Plovdiv Bishopric, "Holy Apostle Hermas", to the Mayor of the city of Pazarzhik Todor Popov and the Pazardzhik Prosecutor Stefan Yanev.

He praised them for their contribution to "standing up for Christian values, defending Orthodox Christian morality and spirituality, the sanctity of marriage, family, and statehood."

About a month ago, the local authorities in Pazardzhik stirred a controversy after coming up with an order banning the displays of one's sexuality in public, a measure which was directed at homosexuals. The ordinance came about a month after Bulgaria's third ever gay pride parade in Sofia that rallied several hundred people in June.

When a gay rights organization appealed the ordinance before the local Prosecutor's Office, Prosecutor Yanev upheld the Pazardzhik municipal ordinance in an official decision filled with extensive deliberations on human sexuality, “natural law,” and “propriety”, and essentially determining that public display of one's sexual orientation constitutes “debauchery.” Yanev's decision was subsequently overruled by the Supreme Administrative Prosecutor's Office in Sofia.

The Plovdiv bishop originally announced his intention to award Popov and Yanev on August 20, 2010. On Monday, September 6, he presented the awards after serving in the largest cathedral in Pazardzhik, which falls within his diocese. The chair of the Pazardzik city council, Georgi Yordanov, also got an award – an honorary certificate from the Plovdiv Bishopric.

"There is something called public morality. The society is not obliged to watch how somebody is sticking into its eyes their own travesty, and to watch how somebody is destroying the souls of our children, and pours poison into the very idea about the sanctity of the bond between a man and a woman that forms a family. The task of the Orthodox Church assigned by our God Jesus Christ himself, is to protect the moral and ethical principles of scripture. The job of the church is to condemn the devil when he tries to destroy this holy order," declared bishop Nikolay upon bestowing the medals.

He reminded that in June the Holy Synod of the Bulgarian Orthodox Church denounced the Sofia Pride gay parade.

"The Holy Synod is resisting decisively any public and shameful demonstration of sodomic sin that destroyes the traditional foundations and values of the Bulgarian people and brings enticement into the views of our children and youth," he said praising Mayor Popov and Prosecutor Yanev as an example for Orthodox Christians.

The recent ban on public displays of homosexuality in Bulgaria's Pazarzhik was revoked with an intervention of the Supreme Administrative Prosecutor's Office in Sofia shortly after it was issued.

The scandalous ban in Pazardzhik at first was upheld by the local prosecutor Stefan Yanev who backed his decision with extensive deliberations on human sexuality, “natural law,” and “propriety”, and essentially described public displays of one's sexual orientation as debauchery.

The Pazardzhik prosecutor consistently upholds that heterosexuals should be not allowed to demonstrate their sexual orientation either, but subtly classifies other orientations as "unnatural."

He compares homosexuality, bisexuality, and heterosexuality with pedophilia, zoophilia, gerontophilia, necrophilia, and fetishism, as he considers all of those forms of sexual orientation.

Yanev issued his decision after Bulgarian gay rights activists appealed against a ban on gay parades introduced by the local authorities in Pazardzhik.

The Supreme Prosecutor's Office, however, believes that the local ordinance banning displays of sexuality, which was upheld by the prosecutor, is illegal and contrary to national and international legal norms.

"Yanev's ignorance is his own problem but it also turns into the problem of 120 000 people living the Pazardzhik Municipality when he uses it to interpret rules and legislation that he apparently did not even read," said an activist of the Bulgarian organization "LGBT in Action."