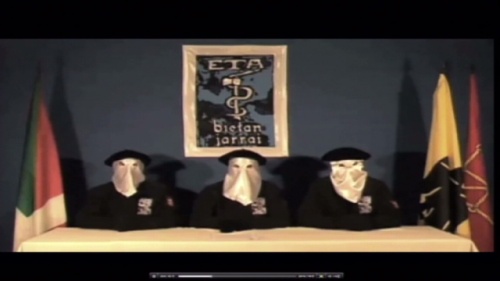 In a video broadcast by the BBC on Sunday, three hooded Eta fighters are shown sitting behind a desk with the Eta flag pinned up behind them.

The Spanish government has dismissed as "insufficient" a ceasefire by Eta, saying the Basque separatist group must renounce violence forever.

Interior Minister Alfredo Perez Rubalcaba said the group was weaker than ever and his government would continue to pursue its members.

At the weekend Eta said it would no longer carry out "armed actions".

Its campaign for a separate Basque state has led to more than 820 deaths over the past 40 years.

Eta has called two ceasefires in the past but abandoned them both. It is unclear whether the latest is meant as a permanent or temporary move.

Rubalcaba said Eta had broken too many ceasefires to be trusted and the days of declaring a truce and starting a dialogue had passed.

"I think the word insufficient reflects quite well the position not (just) of the government but of all the democratic parties," he told Spain's state-run TVE television station on Monday.

The latest statement by the group came after the arrests of numerous Eta leaders.

In a video broadcast by the BBC on Sunday, three hooded Eta fighters are shown sitting behind a desk with the Eta flag pinned up behind them.

One reads out a statement defending Eta's campaign of violence, but towards the end says the group now wants to achieve its aims by peaceful means.

"Eta confirms its commitment to finding a democratic solution to the conflict," the statement says.

It adds that the group is seeking dialogue with the Spanish government.