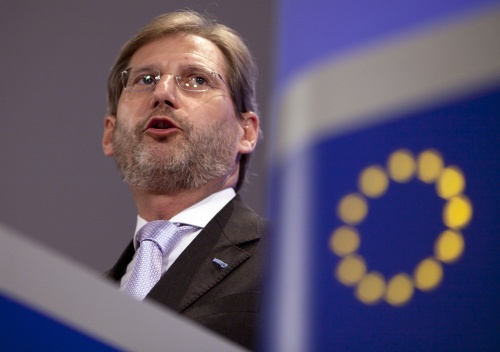 EU Commissioner for Regional Policy Johannes Hahn has expressed concern and bewilderment at the failure of Bulgaria and Greece to take advantage of the European Territorial Cooperation Program.

"The Commission is concerned by the long delay in the assessment of the projects and the selection process, which is supposed to last for about 3 months. At present, about ten months after the deadline, the projects for funding have not been selected yet," states the EU Regional Policy Commissioner with respect to the joint Bulgarian-Greek projects for territorial cooperation.

The EP group of the Bulgarian Socialists has commented that the cited letter of the Commissioner is the first time a senior EC official has criticized the Bulgarian government with respect to the absorption of EU money after the Borisov Cabinet managed to achieve the "unfreezing" of the pre-accession funds blocked by the Commission in 2008 over the failure of the previous government to tackle alleged abuses.

Commissioner Hahn's letter expresses bewilderment at what might have caused the delay of the selection process for Bulgarian-Greek projects. The letter says the EC has pointed out many times that such delays are "unacceptable."

According to the EC, the delay could probably be explained partly with the financial issues and anti-crisis measures in Greece having to do with the country's budget deficit, which have made it harder to provide co-funding for regional cooperation projects.

Yet, in his letter, EU Commissioner Hahn makes it clear that the above-mentioned delay is "inexplicable" given the huge interest towards the European Territorial Cooperation program by the business sector. He says it is unclear why the governments in Sofia and Athens do not view it as a priority.

The press service of the EP delegation of the Bulgarian Socialists has explained that the former Socialist-led government of Sergey Stanishev prepared the first call for Bulgarian-Greek projects under the program, while the call itself was published in Separatist 2009. It says the deadline for the selection of projects technically expired in October 2010 but the government has failed assess them and to select the ones to be funded.

The Bulgaria-Greece European Territorial Cooperation Program has a budget of EUR 130 M until 2013. The funding is supposed to go to 80 priority spheres to improve transport, social, and economic infrastructure and conditions in the border regions. Its start was formally announced in Thessaloniki, Greece, on September 4, 2009. Projects for EUR 60 M were supposed to be approved in its first stage.