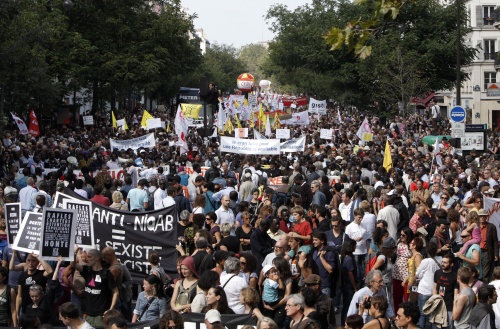 Thousands of people took part in a demonstration to protest against xenophobia and the French government's immigration and security policy, especially the deportation of the Roma minority, in Paris. Photo by EPA/ BGNES

Numerous protest rallies have taken place across France Saturday in protest at the cabinet's policy of deporting Roma people.

Anti-racism groups say least 138 demonstrations are planned, including a march through the capital Paris where over 30 000 are expected to attend. The organizer, the League of Human Rights, explained it wanted to counteract government "xenophobia" and the systematic abuse of Roma in France, the BBC reported.

The rallies are supported by the opposition Socialist Party and by France's second largest trade union, the General Confederation of Labor (CGT).

Addressing the demonstration in Paris, actress Jane Birkin said it was up to the French public to stand up for the rights of the Roma people.

Despite the large-scale protests, opinion polls show more than half of French people back the government on the issue.

In the beginning of August, France began a high-profile campaign of dismantling large numbers of illegal Roma camps in a move announced by President Nicolas Sarkozy.

The security crackdown was triggered by a number of incidents of violence. In mid-July, riots erupted in Grenoble after police shot an alleged armed robber, followed the next day by an attack of Roma on a police station in the town of Saint Aignan. The latter riot happened after police shot dead a Roma man who had allegedly not stopped at a police checkpoint.

The mass expulsions have drawn criticism from the international community, the Vatican and the UN. During the past week, European Commission also criticized France saying it did not put enough emphasis on individual circumstances.

Sarkozy also faces opposition from his own cabinet with Prime Minister Francois Fillon hinting he disliked the crude links being made between foreigners and crime, while Foreign Minister Bernard Kouchner said he considered resigning over the issue.

The deportations saw 1 000 Roma returned to Romania and Bulgaria last month while 11 000 were expelled from France last year, according to BBC.

France insists the deportations are not contradicting EU laws, including the free movement of people.

Under EU rules, the State can expel people who have been in the country for at least three months without a job and/or are deemed to be a threat to public security.