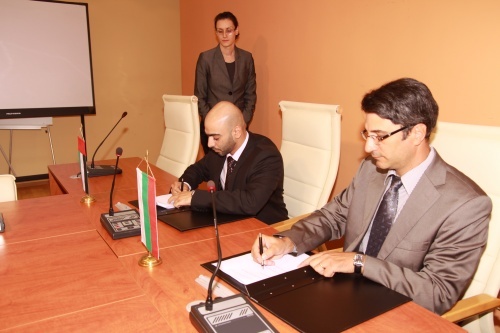 The caption as reported by the Economy Ministry press office and Bulgarian media on August 30 reads: the Minister of Economy Traikov, and the Sheik of Abu Dhabi, Mohammed Abdul Jalil al Blouki (l), signed an economic cooperation agreement. Photo by Econom

Bulgaria's Economy Ministry has declared that the Abu Dhabi company EABG is committed to the plans for building a Formula 1 circuit in the country despite a misunderstanding that led to an international scandal.

Thus, the Ministry has refuted the reports in the Bulgarian media that EABG (Emirates Associated Business Group), a private consortium uniting 67 companies from telecommunications, oil and gas, software and hardware, cargo trade, manufacturing, construction, real estate, declared it had no intention whatsoever to invest in Bulgaria's potential Formula 1 track. (Background details read below.)

Earlier this week, Bulgaria's Economy Minister Traicho Traikov and Mohammed Abdul Jalil al Blouki, the Chairman of EABG, signed a "Letter of Intent" presented by the ministry press office as an economic cooperation agreement referring to infrastructure projects and a Formula 1 track.

Late Friday night, the Economy Ministry announced that it had received an "unofficial letter" from EABG, which was actually sent to the Bulgarian Motorcycling Federation by an EABG representative, that confirmed the Abu Dhabi consortium was ready to work with the Bulgarian government.

A copy of the email or "unofficial letter" sent to the Motorcycling Federation, which according to the Bulgarian Economy Ministry confirms EABG's readiness to work with the Bulgarian government, has been released by the Ministry press office. It reads as follows:

From: anwarbadwan@aol.com
Subject: letter of attend with the Minsery of econmic
Date: Thursday, September 2, 2010, 10:42 PM

After a length conversation with Mr Raid  chief executive officer of EABG , he stated that they are committed to the letter of attend they sign , he further stated that  his company is private company and the chairman is not a sheikh , he is private business man and somebody in the press is writing misleading information and creating a bad atmosphere . EABG is moving forward to work with the government of Bulgaria in according in the letter of attend.

The precise position at EABG of the signed person Anwar Badwan remains unclear.

Based on the cited email, the Ministry emphasizes that EABG believes that the press in Bulgaria "is writing misleading information" but that the company is nonetheless "moving forward to work with the government of Bulgaria in according in the letter of attend."

In its press announcement Friday night, the Economy Ministry has also stated that a representative of EABG will be arriving to Bulgaria on Saturday in order to help clarify the entire misunderstanding about the involvement of the Abu Dhabi consortium with a potential Bulgarian Formula 1 project.

With respect to the chair of EABG, Mohammed Abdul Jalil al Blouki, the Ministry has clarified that the incorrect information about him released initially by its own press center (including describing him as "the Sheikh of Abu Dhabi" had been submitted by persons from the delegation accompanying him during his meetings with the Bulgarian Prime Minister Boyko Borisov and Economy Minister Traicho Traikov.

Earlier on Friday, the Bulgarian daily "Sega" reported that the Abu Dhabi company Emirates Associated Business Group (EABG) refuted statements of Bulgarian authorities it will invest in the project to build a Formula 1 racetrack.

The Sega daily cited a company statement informing EABG had no intentions whatsoever to invest in any such endeavor, and is very disappointed by the way the information got twisted around they would cancel all investment plans in Bulgaria all together.

The company's statement was sent to the media ("Sega") upon inquiry by reporters. The CEO of EABG, Raid Abu Hudra, is cited as saying the group never before encountered such lack of professionalism and will do their best to warn all its partners to not invest in Bulgaria.

EABG was invited through a mediator by the Prime Minister's office to discuss possibilities of our inclusion in the Formula 1 project. We told him we would not be interested in such project, but he then mentioned there would be other investment possibilities and since we were in the region we decided to stop by and check what all this means, Raid Abu Hudra said according to "Sega".

The CEO is further quoted as pointing out what has been accomplished so far for the Bulgarian Formula 1 project was not at all impressive and the Bulgarian side was told during the meeting the plan is in a very early stage, and most of all, it had no economic feasibility study - the least thing that must be prepared before such large-scale endeavors.

Another stated problem is the fact the official pres releases of the Bulgarian Council of Ministers listed EABG as a state-owned, not private, and its owner Mohammed Abdul Jalil al Blouki was presented as a Sheikh of "Abu Dhabi", not as businessman. In its coverage, Novinite.com (Sofia News Agency) corrected this information after conducting its own research.

According to the Sega newspaper, EABG further says they asked for an official rebuttal from the Office of the Bulgarian Prime Minister but are yet to receive it.

The news about the forthcoming construction of the F1 racetrack was first published on August 30 by the Ministry of Economy, Energy and Tourism.

In its original press announcement, the Economy Ministry press office said Minister Traikov and Mohammed Abdul Jalil al Blouki described as "the Sheikh of Abu Dhabi" (reported correctly as the chair of EABG by Novinite.com) and "CEO of the Abu Dhabi state company Emirates Associated Business Group (EABG)", "an economic cooperation memorandum" providing for the funding of the construction of a potential Formula 1 track in Bulgaria.

The press release further noted the project will be realized through a joint company in which Bulgaria will participate with land while EABG will provide financing and the future track will be managed year-round, according to the F1 schedule.

The cabinet's press center issued a similar press information saying after meeting the Sheik, PM, Boyko Borisov, had asked the Economy Ministry and the InvestBulgaria Agency to provide information on partnership opportunities in infrastructure, farming, IT, and land market.

Just two days ago, in a TV interview, Traikov said he was optimistic about the project's realization.

Borisov told "Sega" he was not surprised by the reaction of EABG but referred them to former Interior Minister, Rumen Petkov, and now Member of the Parliament from the Socialist Party, and to the President of the Bulgarian Motorcycling Federation, Bogdan Nikolov, because they insisted Borisov meets with the people from Abu Dhabi. Petkov and Nikolov are the also ones who must explain why EABG was misrepresented, according to the PM.

Borisov declared he had no intentions of apologizing because he was not responsible for the blunder.

Just months ago, after a visit to Qatar, the PM announced the F1 track will be built by a Qatar-Bulgarian company, which never materialized, and meanwhile the project was offered to EABG.

The day after the signing of the ill-fated "economic cooperation memorandum" between the Bulgarian government and EABG, which turned out to be a "letter of intent", the head of the Bulgarian Motorcycling Federation Bogdan Nikolov told Novinite.com (Sofia News Agency) was an important step towards building a Formula 1 track in Bulgaria, and that the fate of the Bulgarian Formula 1 facility will be clear in two weeks.