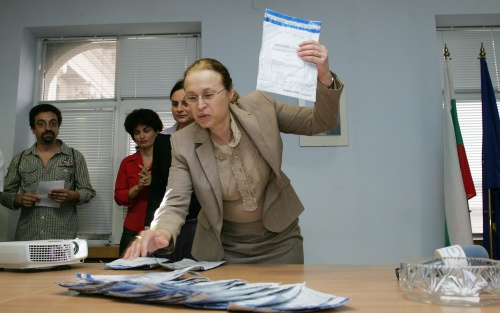 Milka Kodzhabashieva (middle) has been sacked as a Deputy Education Minister over an "ethnic" scandal. Photo by BGNES

Bulgaria's Deputy Education Minister Milka Kodzhabashieva has lost her job as a result of a scandal involving regulations with questionable ethnic self-determination provisions.

The scandal developed out of a letter of instructions sent by Kodzhabashieva to the Educational Inspectorate in the southwestern Blagoevgrad District regarding the gathering of data about minority students in order to provide teachers for "minority" language classes.

In her letter, Kodzhabashieva recommended that school teachers should determine the ethnicity of the students for statistical purposes without asking the students themselves or their parents about their self-determination.

The ethnic Turkish party Movement for Rights and Freedoms (DPS) has protested against this regulation from the parliamentary floor, and demanded the resignation of either the Education Minister, or the head of the Regional Education Inspectorate in Blagoevgrad.

After discussing the situation with Kodzhabasheva, Bulgarian Education Minister Sergey Ignatov announced that she is resigning. Shortly after that the government press service said Prime Minister Boyko Borisov will accept the resignation of the Deputy Minister.

The DPS party expressed doubts if the "ethnic determination" initiative was the brainchild of Minister Ignatov himself.

According to Ignatov, however, the scandal is a technical mistake resulting from Kodzhabasheva's overzealousness for her job.

"This is a violation of the Constitution. For example, judging by my name somebody could determine that I am Russia, while I am Bulgarian," he explained.

Ignatov also praised Kodzhabashieva for her professional qualities and said that even though she had to resign from her political position, she should be kept in the ministry as an expert.

Bulgaria's Blagoevgrad District contains a large population of ethnic Bulgarians who are Muslims, known as Pomaks, as well as smaller minority groups such as Roma.