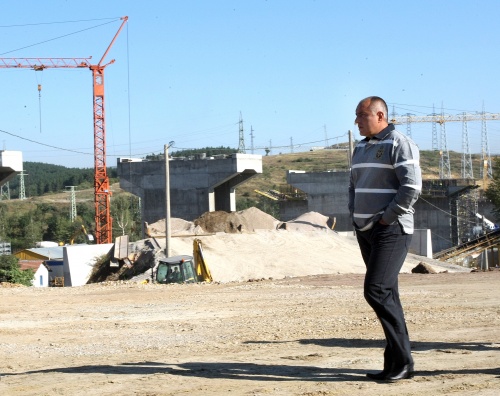 Bulgarian PM Borisov with part of the uncompleted Lyulin Highway in the background. Photo by BGNES

Bulgarian Prime Minister Boyko Borisov hardened his tone towards Turkey and Turkish investors after he found a new delay in the construction of the much problematic Lyulin Highway.

Carrying out his intention to inspect the work of the Turkish company Mapa Cengiz every 20 days, Borisov showed up on the construction site near Sofia Friday discovering a delay of 70 days, up from the 10-day delay established a couple of weeks ago.

The Bulgarian Prime Minister announced he had called his Turkish counterpart Recep Tayyip Erdogan urging him to contact Mapa Cengiz. After Erdogan's conversation with the company, its management has committed to meeting the deadlines.

"I have made it clear that if this company fails I will not let a single Turkish company to work in Bulgaria any more," Borisov declared in a harsh tone.

"Even in your worst nightmares you did not foresee my taking over! You did not think that I will become prime minister, and expected to build the highway for three more years," he told the managers from the Turkish company.

Borisov even issued an ultimatum to Mapa Cengiz to complete within 20 days one of the overpasses to the Daskalovo road junction in order to relieve the traffic from Sofia to Greece and to the southwestern winter resorts before the winter.

"It is crucial that we should be able to use this expensive infrastructure very quickly to ensure the convenience of the people. The construction of the tunnels is going fine, I hope that the highway will be a fact by the end of the year," he explained.

In his words, the construction of the Lyulin Highway has cost BGN 121 M so far, of which BGN 107 M have already been paid to the Turkish company. His Friday's inspection on site was his second.

"Their delay is three years. We have brought that down to 70 days. I am keeping my commitment, and will be inspecting the highway every 20 days," he said.

Borisov did not abstain from blaming the former government of Sergey Stanishev saying that the Turkish company was not that much to blame of taking advantage of the opportunity to procrastinate the construction and receive money from the Bulgarian state because it was allowed to do that. He pointed out that the Stanishev Cabinet tolerated the work of Mapa Cengiz with only 8% completion.

"The entire control on the project by the former government was making a photo on the site at the beginning of their elections campaign," declared the PM. He even cited his grandfather who used to say that "having is at least three times better than not having."

The 19-km Lyulin Highway is supposed to become Bulgaria's first completed highway. It will connect the capital Sofia with the Daskalovo road junction near Pernik, and thus, with the Struma Highway leading to the Greek border and Sofia-Nis Highway leading into Serbia.

The Lyulin Highway was supposed to have been completed by 2010 but after a number of issues with the work of the Turkish company executing the project Mapa Cenghiz, the Bulgarian authorities agreed to renegotiate the contract by providing substantial additional funds and setting May 15, 2011, as the deadline for the opening of the new road.