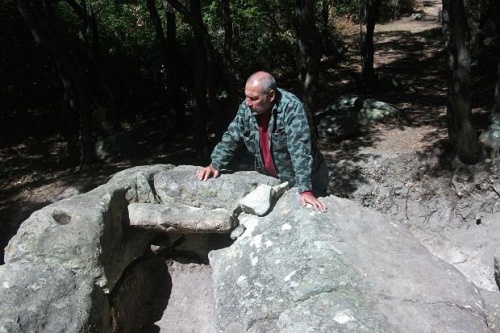 Top Bulgarian archaeologist Nikolay Ovcharov is pictured close to the entrance of one of the two newly found tombs at the holy rock city of the Thracians Perperikon. Photo by Darik Kardzhali

The tombs are dated to 1100-1000 BC judging by the pottery and ceramics found in them, which are characteristic of the later Bronze Age and the early Iron Age.

One of the most interesting finds in the tombs is a bronze coin with the face of Emperor Alexander the Great, dated to the 4th century BC. Prof. Ovcharov believes this is a clear evidence that the tomb was venerated as a shrine by the Thracians in the Antiquity for a long time after its original creation.

The archaeological team stumbled across the two tombs as they were working on diverting a tourist path away from a spot of excavations at Perperikon, the holy city of the Thracians.

The tombs are situation in an east-west direction, with the buried notable facing the rising sun, a clear sign of a sun cult.

The excavations have revealed ritual hearths and others signs of sacrifices that were connected with the traditions of venerating the dead as godly creatures.