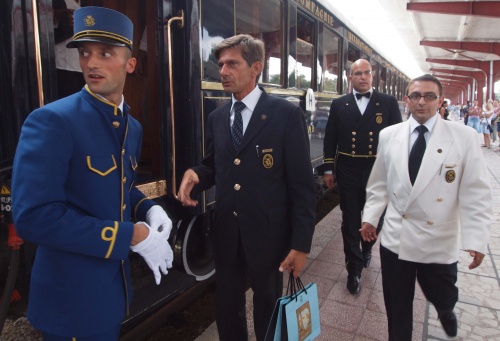 The famous “Orient Express” arrived in Bulgaria's Varna at 4:15 pm Tuesday and was met by scores of Varna residents, visitors, and media representatives. Photo by BGNES

Scores of Varna residents, visitors, and media representatives gathered at the railway station to meet the famous train, which arrived on schedule to the minute. This year the composition has about 100 passengers. Currently the train is pulled off the tracks to be recharged with water and could be seen by the curious again at 8 pm for about 20 minutes.

After that “Orient Express” will depart for its last stop and final destination – Istanbul.

The luxury train, often described as a five-star hotel on tracks, travels with a speed of 100 km per hour and provides its passengers an out-of-this-world travel experience between Paris and Istanbul for prices over EUR 6 000 – from EUR 6 850 for a double compartment to EUR 9 940 for an apartment. Each passenger must pay an additional fee of EUR 3 360 if they wish to have the entire compartment for themselves.

“Orient Express,” took its first trip from Paris on October 4, 1883. It was then named “Express d'Orien,” until 1891 when it was given the now famous “Orient Express.” At the time it traveled twice a week from Paris trough Strasbourg, Munich, Vienna, and Budapest to Gurgevo where on a ferry it reached the Bulgarian Danube city of Ruse.

People like Franz-Joseph, Elizabeth II, Honore de Balzac, Charles de Gaulle, Agatha Cristie, and many other celebrities and royalty are among those figuring on its passenger list at different times.