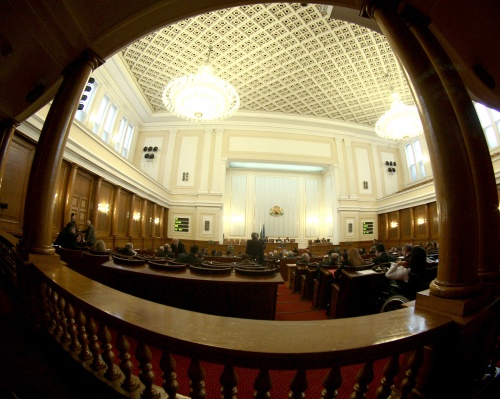 The plenary hall of the Bulgarian Parliament. Photo by the National Assembly.

Speaker of the Bulgarian Parliament Tsetska Tsacheva stated that the legislative body will introduce key reforms in its new session starting Wednesday.

Among the top priorities of the National Assembly are healthcare reforms, introduction of new electoral legislation and the reform in the judiciary, said Tsacheva for the Bulgarian National Radio and the National TV.

Healthcare reforms will aim at stopping an ongoing leaking of funds from the system, which according to Tsacheva has been going on for more than 20 years.

The Parliament Speaker stated that the committee charged with framing a new electoral code has already prepared its report and plenary discussion will start in the nearest future, saying her ambition is that the new legislation be adopted by the end of the parliamentary session before Christmas.

Regarding the fight against organized crime and the ongoing reform of Bulgaria's judiciary, Tsacheva stated that the Parliament's priorities will be framing the legislative basis for the creation of so-called 'specialized courts' or 'mafia tribunals.'

Wednesday's parliamentary day will also feature a number of committee sittings, including a presentation of a Midterm Report on the Absorption of EU Funds for 2010 at a sitting of the Parliamentary Committee on EU affairs.