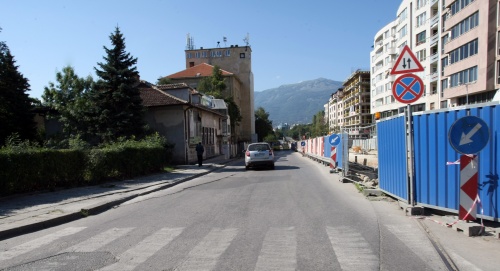 Fandakova apologized and appealed to Sofia residents and visitors to be patient upon inspecting the subway works at the “Cherni Vrah” boulevard where parts of the road, near the construction site, collapsed Sunday.

According to the Mayor, the upcoming fall will be the most difficult one for Sofia's traffic so far, adding the need of large-scale construction works was imposed by the fact that in the last 20 years the city's population grew at staggering rates, but its infrastructure remained untouched. She said in an effort to catch up, the City Hall must do all these repairs, and is making all effort to not only adhere to deadlines, but even accelerate them.

Fandakova reassured “Vitosha” will be the last boulevard to be closed for traffic over the subway construction.

The Director of the municipal company “Metropolitan,” Stoyan Bratoev, said “Chenri Vrah” will be fully open for traffic next fall, despite the 2012 subway construction deadline.

The Sofia City Hall is launching Wednesday, on its official site, an online map indicating areas with traffic jams. The map was supposed to be available in the spring.