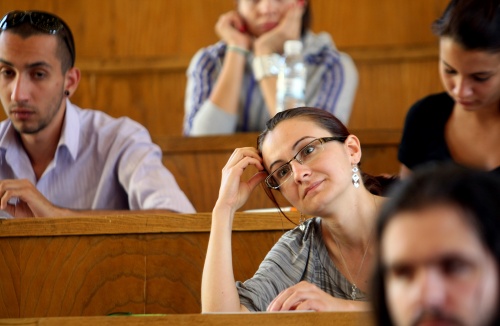 Only undergraduate or graduate student younger than 35 years, who are taught full time for the first time and have not taken leaves of absences, will be able to apply for student loans. Photo by BGNES

The Bulgarian Ministry of Education is expecting about 20,000 student to take loans in the first year of the implementation of the Student Loans Act.

The program was officially announced Tuesday and starting Wednesday, all the students could apply for the two types of loans – for covering tuition fees and for allowance.

The Student Loans Act was adopted in 2008 when Education Minister was Daniel Valchev. However, the banks and the Ministry could not agree on the terms and managed to sign a contract in the middle of 2010.

Only two banks have signed the contract, DSK Bank and Raiffeisen Bank, and both will offer the same conditions. The annual interest rate on the loan will not exceed 7% and the students will be exempt from all fees on the lending and acquisition of the loan.

Undergraduate and graduate students, who are younger than 35 years, taught full time for the first time and have not taken leaves of absences, will have the right to take a loan.

The banks will be considering the applications within five days.

“We have waited many years for the system to start working. We also have to acknowledge the efforts of the team from the previous government, which started the project. I hope that many students will take advantage of it,” said Bulgaria's Education Minister Sergey Ignatov.

The first tuition fees will have to be paid by the students. As soon as they present a document proving they have paid the fees, the banks will reimburse the money.

The banks will transfer the money for the tuition fees directly to the accounts of the universities, taking into account the deadline for payments, while the allowance money will be transferred to the students' accounts.

The repaying of the student loans will begin one year after graduation and will be redeemed over 10 years of equal monthly installments.