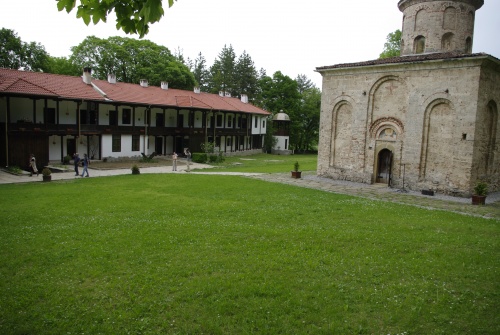 The Zemen Monastery site consists of two connected whitewashed dwelling buildings, surrounding a lush meadow, a small bell tower, and a church in the middle of a spacious inner yard. Private photo

“This evening Lyudmila learned the history of the monastery near Zemen. From the Princess of Monaco. The former Hollywood star. But it was not a Hollywood script; she told her facts.

Why exactly in Bulgaria and why in Zemen of all places? Why in a church built as a circle in a square – so unusual for these Orthodox lands? And on top of it – nine by nine. Why namely “St. John?” Why did the Knights pass through this gorge on their way to the Holy Lands? Who and why greeted them as their own? Why is everything made of stone? And the most intriguing – why did the Bulgarian Patriarchate voluntarily give up this monastery? Questions, questions, questions. Questions to which she never before taught to find answers.

You must be fortunate people because the teaching that created the modern world was born on your land – the classy lady stunned her.

If you have the Thracians in mind…

No dear! I know about the exhibit you opened today. But right now we are talking about the Bogomils.

The Bogomils? But you, in what sense?

Then she heard another story. About the Great Priory. About something she vaguely remembered running into during her specialization in Oxford – the mystical Brotherhood of Sion…

“What is the connection with us, Bulgarians?” She was puzzled.

They talked for a long time. They had several more evenings ahead of them. The alternative medical procedures at this strange place yielded promising results. The pain diminished. She left after 40 days.

A month later, however, the pain returned to its ripping beat. There was a reason. Her father went berserk when he learned about her strange occupations. He exploded like never before. What did she find in this Zemen church? Why was she stirring problems for him with this religious non-sense about some Bogomils, instead of getting busy with useful political party work?

She realized everything was lost…" The Zemen Monastery – one of Bulgaria’s most beautiful historical sites, gained new popularity after the publication of Nedkov’s two fiction books, (“The Menace Dan Brown” was first), where he often talks about the secrets kept behind the walls of the Zemen Monastery and its church. The author seeks to lift the curtain and take a deeper look at this mysterious place - why the Bulgarian Orthodox Church gave up the Zemen Monastery in the 60s of the 20th century; why the monks, living there in the 19th century, assigned with copying the manuscripts from Rhodes, were becoming one by one deeply disturbed to the point the monastery acquired the reputation of being the psychiatry clinic of the clergy, eventually leading to its full abandon… Until a trip to Monaco of Lyudmila Zhivkova - daughter of Communist Dictator, Todor Zhivkov, and at the time Head of Bulgaria’s Culture Committee. (Lyudmila was known for her preoccupation with Bulgaria’s culture and historic heritage). Nedkov discloses that during this trip, Zhivkova met the Princess of Monaco and upon returning to Bulgaria began a feverish restoration of the sacred cloister.

The Zemen Monastery, a Bulgarian Orthodox monastery, named St John the Theologian, is located in western Bulgaria, just outside, about two kilometers southwest, of the town of Zemen and about 15km down off the main road from Sofia to the town of Kyustendil and the Serbian border. The area, in the skirts of the Konyavska Mountain, is a beautiful spot with the picturesque and rugged 19-km-long Zemen Gorge carved by the Struma River. This is the gorge which the Knights Templar crossed when they were on their way to the Holy Land.

The site consists of two connected whitewashed dwelling buildings, surrounding a lush meadow, a small bell tower, and a church in the middle of a spacious inner yard. Local Bulgarians did renovation works at the monastery in the beginning of the 19th century and built the living quarters, combining monks’ cells with guest rooms. The beautiful bell tower inside the yard was built after Bulgaria gained its independence from the Ottoman Empire. Until 1966, the monastery was functioning and was used as some sort of ward for monks suffering from psychiatric disorders. This is also the time of the discovery of the unique frescoes; the time when the Holy Synod agreed to give up the monastery to the State. The entrance to the picturesque and beautifully maintained Zemen Monastery site. Private photo

A thorough restoration of the frescoes was conducted in the late 1960s and the early 1970s.

The church and the monastery are not currently functioning; they are declared a national monument of culture under the management of the National History Museum, attracting visitors from all over the world.

In his books, Dimitar Nedkov often hints that the spiritual teaching which triggered the Reformation of the Western World was born right there - on the left bank of the Struma river while the mysticism of the place is representative of the importance of Bulgaria’s cultural and historical heritage to the world.

"A master mason and his apprentice decided to hold a contest – who will build a more beautiful church. There had been only one rule – not to see the other’s work until completed. The two built their churches 10 kilometers one from the other along the banks of the Struma River. When the construction was finished, a huge crowd, headed by the local nobility, came to judge. The master saw the work of his student, exclaimed in admiration and ordered his helpers to demolish his own church."

This is one of the oldest legends circulating around the Zemen area and a story the tour guide at the Zemen monastery loves to tell. For many years back, treasure hunters, mystery lovers and archeologists wander in the mountain near the monastery in search of ancient secrets. Another legend says the treasure of Tsar Mihail III Shishman is buried nearby. The Tsar was killed in a battle with the Serbian ruler Stefan Dechanski in 1330 near what was known as the Zemlungrad fortress. It is believed the name Zemen comes from either “zavzemane” or “zemiya” – in Bulgarian to conquer or earth respectively. The church is the oldest building inside the Zemen Monastery, dating from the 11th century. Private photo

The church is the oldest building in the complex and dates back to the 11th century AC. It is one of the few surviving examples of Bulgarian Middle Age architecture, masonry and wall paintings. The church is a cubic building with a dome made of stone. Its cruciform structure resembles a giant cube with a central cupola that stands on four huge pillars of solid masonry; arcades connect them with the exterior walls. Visitors are particularly taken by the massive altar and the floor, which resembles a mosaic of different-colored pieces of marble and stone. In his book Nedkov writes the Bulgarian’s Sign, a holy relic, was kept in the stone altar inside the church, but in order to preserve it, it was split in three parts during the Middle Age and spread around the world.

It is however the frescoes of biblical images and scenes, which cover all inner walls, that leave the greatest impression. The better preserved murals have been dated to the 14th century; they have been skillfully done and are in line with the architectural ideas and their execution. The scenes and images and their distribution in the mural space strictly correspond to the laws of iconography and to the ecclesiastical canons of how to paint a Christian temple in fresco. When the church was last restored, fragments of the first mural layer were uncovered, dating back to the 11th century. One of the oldest icons of St. Ivan Rilski, founder of Rila Monastery, is among the second layer of frescoes, and is preserved in good condition while the images of the church donors, Deyan, his wife Doya, and their two children and the other, featuring a young man, Vitomir, and a boy, Stoyu, are among the oldest and most valuable church-donor paintings in Bulgaria and on the Balkans, comparable and only second to those of Kaloyan and Desislava seen on the walls of the Boyana church near Sofia. (The latter church is considered a unique monument of immense cultural value; it is also on the UNESCO cultural heritage list.) There is an inscription in Middle Age Bulgarian above the portraits of the main church donors The Saints look like real people and have nothing to do with the style of the Byzantine painters from this time period. They are depicted in golden halos on a background of blue and grey color while the narrative scenes use warmer hues such as ochre, dark blue and red to portray The Treason of Judas, The Judgment of Pilate and the most famous one – The Forging of the Nails for the Crucifixion. Very little is known of the anonymous artist, referred to as the Master of Zemen, apart from the fact that his style shows strong oriental influences.

The monastery is reached easily as it takes about 5min to get there from the center of Zemen by car or alternatively, about 30min on foot. The road from Zemen to the monastery is a pretty good, asphalt one. Those driving will, however, miss the beautiful nature views that can be seen by visitors who decided to take the train. The monastery does not offer food or accommodation though it may start doing so in the near future.

* Dimitar Nedkov is considered by many one of the top experts on Freemasonry in Bulgaria. Nedkov is a Mason 33 Degree (the highest), co-founder of the Supreme Council, 33 of the Ancient and Accepted Scottish Rite, former Grand Orator of the Grand Lodge of the Ancient, Free and Accepted Masons in Bulgaria, and a a member of the International Academy of the Illuminati in Rome. An avid Masonic scholar, Nedkov is the author of three documentaries about Freemasonry. His last two novels “33 The Menace Dan Brown” and "The Bulgarian's Sign" have been bestsellers ever since they appeared on the bookstands in Bulgaria.