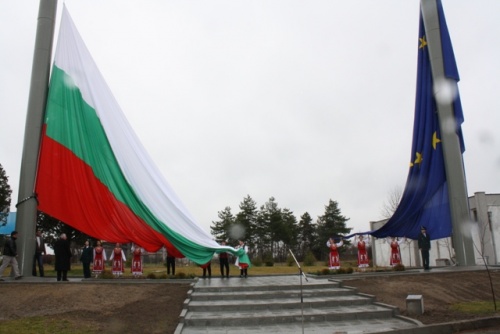 The Kapitan Andreevo border crossing point is the major crossing on the southeastern border of the EU. The photo is from the raising of the EU flag there after Bulgaria's accession in 2007. Photo by BGNES

A huge line of trucks waiting to cross into Bulgaria has formed on the Turkish side of the joint border.

The 10-km line is the result of the sluggish work of the Bulgarian Customs at the Kapitan Andreevo border crossing point, according to Turkish media citing sources from the Kapikule checkpoint on the Turkish side of the border.

The insufficient territory of the Bulgarian customs checkpoint forces the truck drivers to wait on Turkish territory.

A similar, 12-km line of trucks was formed at Kapitan Andreevo in July, which led to an internal investigation into the work of the Bulgarian Customs at the major checkpoint on the Bulgarian-Turkish border.

Sources from the Bulgarian Customs have blamed the delays on the introduction of a new, slower software.

At the same time, however, Turkish drivers are quoted as saying that the Bulgarian customs offers demand bribes, and make those who refuse to pay them wait in line for hours and days.

Reports in the Bulgarian media even suggested that the delays in the customs are a “tacit retaliation” on part of the customs officers against the increased number of police inspections of their work.

Kapitan Andreevo is the largest crossing point on the Bulgarian-Turkish border as it is located on the shortest land route between Istanbul and Central and Western Europe. The two other crossings on the border - Lesovo and Malko Tarnovo - see a much smaller traffic.