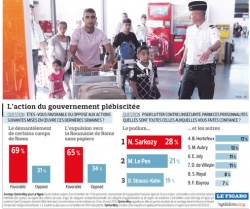 Two out of three French citizens approve the recent actions of their government regarding Roma people, shows a survey by Opinion Way for French daily Le Figaro.

According to the opinion poll 69% of French people look favorably to the “dismantlement of certain Roman camps”, while another 65% support the “expulsion to Romania of certain Roma without documents.”

More than one third are "fully favorable" towards government actions against Roma (375%/37%).

Support is staggeringly high among people sympathizing with French President Nicolas Sarkozy’s UMP (92%/90%), with similar support among those in favor of the French ”extreme right” (97%/99%).

In addition, Marine Le Pen, daughter of notorious far-rightist Jean-Marie Le Pen, and MEP from his Front National, ranks right behind Sarkozy as the second person the French trust the most for “combating insecurity,” which le Figaro dubs a “surprise.” In that respect, Sarkozy has 28% and Marine Le Pen 21%, with Socialist Dominique Strauss-Kahn third at 19%. Minister of Interior Brice Hortefeux, who was involved in France’s recent Roma campaign, is fourth at 17%.

On the other hand, 53% of people interviewed say they trust “neither the left, nor the right” in combating insecurity. An Opinion Way analyst commented that this shows the French see their politicians as “more and more helpless” in the guaranteeing of security to common citizens.

For a summary of the survey (in French) see HERE.