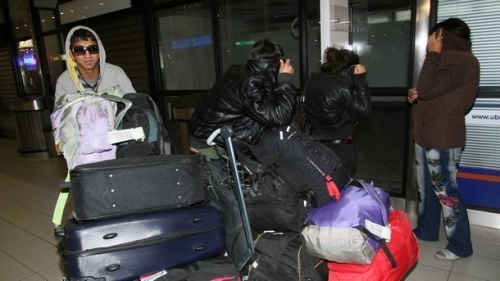 13 Roma deported from France landed in Sofia Wednesday and were transported to the Varna airport Thursday. Photo by BGNES

Roma who landed in Bulgaria’s Varna airport from France at the end of this week said they will return to the country, adding they were not expelled or deported, but were just asked to voluntarily leave for EUR 300.

Roma stated that French authorities have always been extremely considerate with them and that they have nothing to complain about.

They would not stay in Bulgaria, for there was “no work” for them here.

Roma were ambivalent about whether they will be legally allowed to return to France. While one representative was apprehensive that French police marked their identity to forbid future entry, most were certain that French regulations to not prohibit comeback.

Roma specified that the EUR 300 procedure has been applied for a while, including for people of other ethnicities and countries. Many of them pointed out that they had concrete reasons to return, such as caring for sick relatives in Bulgaria.

Reports say the Roma did not have the appearance of beggars or wanderers. The people interviewed specified their occupations while in France, which did not include mendicancy and petty crime.

Defying growing international unease about its crackdown on traveling minorities, France deported hundreds more Roma this week, bringing the number of Romanian and Bulgarian nationals expelled since the beginning of the year up to 8,300.

Two chartered planes carrying almost 300 Romanian nationals left France on Thursday in compliance with the French government's program to expel Roma without valid identity papers, according to the French Ministry of Immigration.

One flight, carrying 113 Roma, departed from Lyon; the other, carrying 157, left from Paris.

French officials have said the deportations are part of a broader crackdown on illegal immigration. Additional chartered flights are scheduled for September 14 and 30.

Over the past month, the French government has dismantled 51 Roma camps that it called illegal.

The crackdown has sparked major criticism at home and abroad. Former French prime minister Dominique de Villepin said Sarkozy's policies had left a "stain of shame" on the French flag and were a "national indignity."