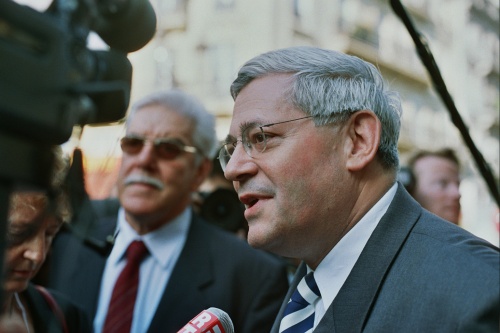 The French Member of the European Parliament, Bruno Gollnisch, proposes that Roma deported from France are accommodated at the St. Peter Square in Rome, according to the French newspaper Point.

Gollnish’s statement was triggered by words of Pope Benedict XVI condemning the actions of the French authorities.

The MEP, who is also a Deputy Chair of the far-right National Front, said he is “slightly irritated by such talk coming from the clergy, adding that after Roma invade the above said square then the discussion could be resumed.

“And I want them to answer – is France under a mandate to open its borders for all who wish to live in our country,” Gollnish said.

According to the MEP, France needs to renegotiate the EU agreements with countries where the Roma come from.

At the end of July, during an emergency meeting of the cabinet, France decided to deport Roma, following clashes between the latter and the police in central France.

Most of the Roma in France came from Bulgaria and Romania after the two countries joined the EU in 2007 and are seen by the majority of the French as a threat to security, according to France Press.

“About 635 Roma have been sent back to Romania and Bulgaria, after their camps were shut down in a crackdown announced last month,” Immigration Minister, Eric Besson, said on Wednesday.