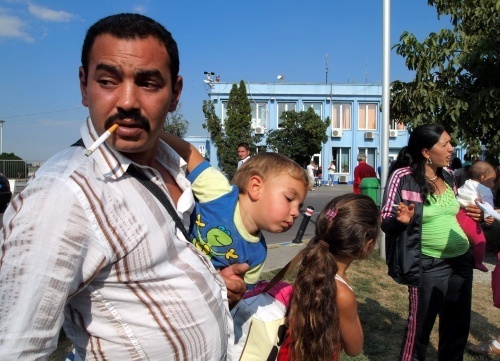 A picture dated 19 August 2010 of Romanian Gypsies arriving at Bucharest Airport, Romania, after having accepted voluntary repatriation from France. 300 illegal camps have been dismantled in recent weeks by French authorities. Photo by EPA/BGNES

By Dan Alexe and Nikolai Petrov

The Romanian population has received the news of the beginning of the expulsion from France of hundreds - possibly thousands - of Romanian Gypsies with almost total indifference, bordering sometimes on outright hostility to the return of the marginalised social group.

Like in many other Eastern European countries, gypsies are largely disliked inside Romania. According to official data, there are some half a million in the country, out of a population of 22 million, but many NGOs affirm that the real figure would be close to 10 percent of the population. The gypsy population is the second ethnic minority in Romania, after ethnic Hungarians.

The French government announced that it would shut down some 300 illegal Roma camps in the next months. Scores of camps have already been demolished by police and hundreds of Roma have been flown to Romania in what French officials call "voluntary repatriations."

In covering the development, the Romanian press has oscillated between amused indifference and undisguised approval of the French actions, with only some of the main national media outlets taking a neutral line.

Some papers questioned the legality of the French initiative. The national daily, Adevarul (meaning "The Truth"), wrote that "asking each country of origin to keep home their Roma is an infringement on the right to free movement." The popular press, however, stirred up anti-Roma resentment with titles like "The Return of the Gypsies" or "The Time of the Gypsies is Ripe."

The Romanian government openly criticised the French move, and on Tuesday (August 24), the French state secretary for European Affairs, Pierre Lellouche, took the unprecedented step of publishing a full-page opinion piece in the Romanian national daily Evenimentul Zilei ("The Event of the Day"), in which he acknowledged that after the accession of 10 Eastern European countries, the EU was "starting to become conscious of the existence in its midst of an authentic 'fourth world,' made up of 9 million Roma who, very often, still live under the most elementary standards of human dignity."

Mr Lellouche tried to justify France's policy of expulsion of Romanian and Bulgarian Roma and reminded his "Romanian friends" that their former president Jacques Chirac "was the first advocate of Romania's and Bulgaria's accession, at a time when many doubted that these two states were prepared to be integrated in the EU."

With Romania hard hit by the economic crisis, and with practically no functioning integration programmes, a Romanian state secretary of the Internal Affairs Ministry, Valentin Fatuloiu, was dispatched to Paris this week, together with officials from the foreign and labour ministries, for a series of talks on the situation of the expelled Roma.

Romania has no idea of exactly how many Roma will be repatriated from France in the coming months, according to another official, the secretary of state for Roma affairs Valentin Mocanus.

Questioned by journalists on their arrival, many of the Roma deported to Romania pledged to return to France as soon as possible. Experts say the expulsions are pointless because nothing prevents those sent back from immediately returning to France.

The Rromas, as their name is spelled in contemporary Romanian (since 1989, the ethnic name "Roma" is spelled with two r's to avoid any confusion with "Romanian" - know very well that they can expect no sympathy among their countrymen.

"The Romanian society sees the gypsies as a foreign element", said Claudiu Padurean, a journalist and executive director for the Human Rights League in Cluj, a Transylvanian city with a large gypsy population. "Their degree of integration into the society is very much reduced. One can only imagine what the general reaction would have been if the expelled people were ethnic Romanians, and not Rromas", Mr Padurean said.

In Bulgaria, the government, obviously concerned that mighty France might block Sofia's entry into the passport-free Schengen zone, seems reluctant to make too much noise about the "repatriation" of Bulgarian Roma.

The measures announced by France were front-page news in the Bulgarian media. But the foreign ministry had just one statement to offer, saying an "insignificant" number of citizens were expected back from France where they had been staying illegally, which means staying longer than three months without a visa, working without a permit or violating some other French law. "Bulgarians have to respect the laws of the country where they live," the ministry said.

Flight reservations indicate France wants to move back at least 41 Bulgarian Roma in August and September. Vessela Tscherneva, a spokeswoman for the foreign ministry, said a maximum 50 people were expected to return. A first group of 13 Roma arrived back in Sofia last Friday, without much public attention, as the media only learned of their arrival afterwards.

Bulgaria's ambassador to France, Marin Raikov, declared there was no point in artificially blowing up what he said was by no means unusual. "It is quite normal that a country such as France applies its own law as well as European rules," Mr Raikov told state radio.

Of the political parties, the Socialist BSP was the only one to react, rejecting the suggestion that Bulgaria's accession to the Schengen area could depend on the country solving its problems with the Roma community first. The BSP statement was a response to remarks by Pierre Lellouche, the French state secretary for European Affairs, who told French daily Le Figaro last week that Bulgaria and Romania might not become Schengen states before they "take responsibility" for their Roma minorities. Both countries hope to join Schengen next March.

The strongest criticism of the expulsion of Roma from France came in an article in the Sega newspaper, which called it "the biggest mass deportation after the Second World War." The ambassadors of France and Italy, Etienne de Poncins and Stefano Benazzo, rejected the accusation in a joint statement, calling it "not only absurd but also insulting." Repatriation could not be seen as deportation, they said.

Most critical comments in the Bulgarian press were not targetted at France but at the European Commission, which was blamed for hypocrisy and double standards over its muted involvement in the affair.