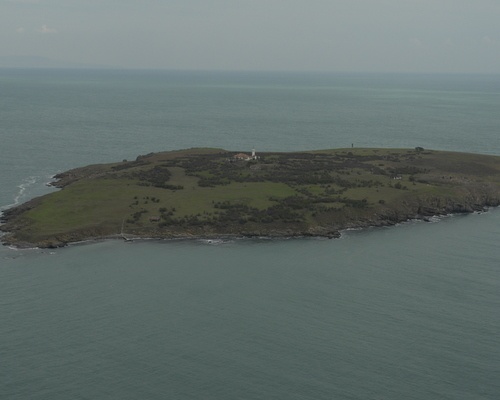 Michael Hesemann, a German historian and author, says the island, where the relics were found, now has the potential to become an important point of pilgrimage for the Bulgarian Christians. Photos courtesy by Kazimir Popkonstantinov

A German historian has denied his comments on the relics recently unearthed in Bulgaria and purported to be John the Baptist, were made on behalf of the Vatican, discrediting the euphoric government.

“I am not and never was in the position to make any statement in the name and with any authorization of “the Vatican” or any Institute or Congregation of the Holy See,” Michael Hesemann, a German historian and author, told Novinite.com.

“I made this very clear in my interview with the Wall Street Journal and I am sorry that some people obviously got a wrong (and certainly exaggerated) impression of my position,” he said.

Ministers from Bulgaria’s center-right government have repeatedly expressed confidence that the relics are authentic, citing Michael Hesemann statement in The Wall Street Journal as the opinion of an expert from the Vatican.

In a comment for Novinite.com, Hesemann pointed out that although he did work on the relic of the titulus Crucis with permission of the Secretary of State of the Holy See, he is a historian and wrote several books on relics of the Passion of Our Lord Jesus Christ, working closely with the competent experts and institutions of the Roman Catholic Church, he is not and never was in the position to make any statement in the name and with any authorization of “the Vatican” or any Institute or Congregation of the Holy See.

“Actually, my statement just reflected my personal opinion after a preliminary look into the results of the excavation and the findings of my highly esteemed Bulgarian colleagues,” he said.

Hesemann pointed out that what the Bulgarian archaeologists found certainly is a typical 5th century reliquary shrine, which most probably was brought to Bulgaria directly from the Holy Land. Since it was the time of the discovery of St. John the Baptist’s tomb and relics in Nablus, there is a certain degree of probability that indeed some relics (bone fragments) from this tomb were brought to Bulgaria at that time.

“This makes the excavation of the reliquary on St. John’s Island certainly an interesting and important discovery, at least in historical, archaeological and certainly in religious terms. Indeed the island now has the potential to become an important point of pilgrimage for Bulgarian Christians.”

Michael Hesemann however thinks the relics lack the "box-office draw" of better-known religious attractions and has advised against misusing them for commercial purposes.

“Indeed you already find (authentic and alleged) relics of St. John the Baptist spread all over the Christian world, just to mention the large skull fragments in the Cathedral of Amiens, France and the Basilica of St. Silvestro in Capite in Rome, as well s the alleged skull fragments in Damascus and Istanbul, the finger relic in Florence and the arm relic on Mt. Athos. Therefore, I doubt that the island will become a second “Santiago de Compostela” or “Turin” in the future.”

According to excavation leader Professor Kazimir Popkonstantinov the Greek inscription on the tiny sandstone box is a very strong proof that the relics of John the Baptist are genuine, the key clue to their origin.