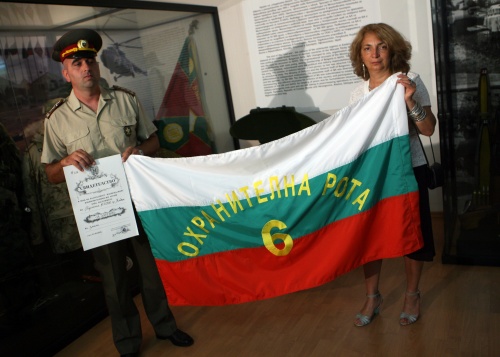 The Colors of the 6th Company, which is the last Bulgarian contingent in Iraq, were sent Tuesday to the National Military History Museum.

Until now, the flag was kept in the barracks of the southern city of Yambol. It was delivered to the museum by the company’s commander, Capt. Georgi Goranov.

The last Bulgarian contingent of 155 rangers, including 9 women, returned from Iraq in December 2008, after guarding Camp Cropper, near Bagdad, known also as the place where former Iraqi Dictator, Saddam Hussein, was kept under arrest.

Bulgaria was in Iraq from 2003 to 2008 and participated with 11 contingents with a total of 3 367 rangers for the cost of BGN 155 M in tax money. Thirteen soldiers died during the five-year mission.

The worst incident happened on December 27, 2003, when five Bulgarians were killed during a terrorist attack on the base in Karbala, after one of four suicide bombers gained car entry to the Bulgarian camp, cutting through roadblocks and destroying a building where the headquarters of the unit was located.

Five Bulgarian rangers died in road accidents in 2005, and one was killed by "friendly" fire the same year.