Bulgarian President Celebrates Friendship with US 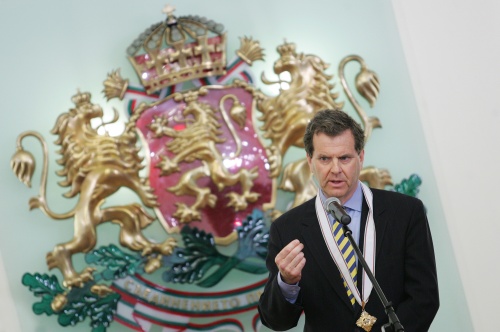 President Parvanov emphasized that this friendship is the result of unflinching efforts of changing administrations in both countries that have been committed to bringing the two nations ever closer together.

“Relations between the US and Bulgaria are better than ever in the more than 100 years of them being established,” said Parvanov and added that American Jewish Committee director Harris has an “invaluable” contribution to that.

Parvanov lauded support from the USA government and the American Jewish Committee for Bulgarian NATO membership, as well as help in other decisive moments.

Harris, on his part, talked about his affection for Bulgaria and Eastern Europe and praised the country for withstanding the hardships of Nazism and Communism. The American Jewish Committee chair himself was a refugee from the Soviet Union.

He thanked Bulgaria for saving its Jews during the Second World War and was grateful to Bulgarian authorities for building “new hopes” for Bulgaria’s future.

The ceremony for the awarding of the Madara Rider order to David Harris was attended by Bulgarian Minister of Foreign Affairs Nikolay Mladenov and American ambassador to Sofia James Warlick.

An AJC delegation, headed by Harris, arrived in Bulgaria over the weekend to take part in the Summer University of the European Union of Jewish Students (EUJS).

David Harris was conferred with Shofar, the greatest award of the Bulgarian Jewish community, for his contribution to the development of the relations between the Organization of the Jews in Bulgaria Shalom and the American Jewish Committee.

Harris said that the US Jewish community has the capacity and is committed to helping Bulgaria “fully and in every single respect” for the full recovery of its international image.