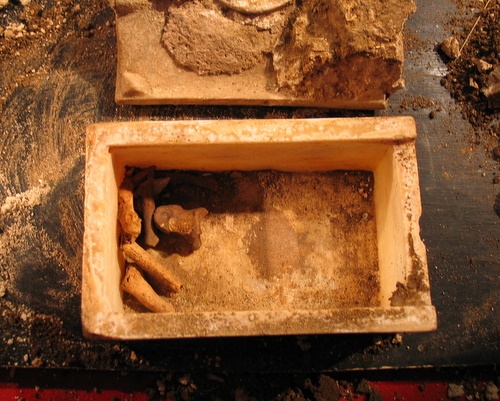 The remains, purported to be John the Baptist, including a skull fragment and a tooth, were uncovered last month during the excavation of a fourth-century monastery on St. Ivan Island, off Bulgaria's Black Sea coast. Photo courtesy by K. Popkonstantinov

The Greek inscription on the tiny sandstone box is a very strong proof that the relics of John the Baptist are genuine, this is key clue to their origin, excavation leader Professor Kazimir Popkonstantinov said in an exclusive interview for Novinite.com.

The renowned archaeologist claim to have unearthed bones belonging to John the Baptist, an itinerant preacher revered by Christians as the last of the Old Testament prophets.

“Right after the discovery I approached colleagues working at the Vatican and asked them about the last time relics believed to be John the Baptist were found during excavation works. It turns out we are the first to do that for the last five hundred years,” Popkonstantinov said in the interview.

According to him the relics of John the Baptist rank among those discoveries that are of great importance not only to the Christian world.

“The discovery is in the same league as the Qumran manuscripts and the discoveries made in the field of Egyptology,” claims Kazimir Popkonstantinov. “This is the reason why world media take such a great interest in the relics, including CNN and National Geographic, who plan to make a movie about the discovery that shook the Christian world.”

Asked to comment the angry exchanges in the local media and even calls for a government minister's resignation that the discovery provoked, Popkonstantinov was sparing in his words:

“I would not comment statements made by anonymous critics. Scientific discussions should not be held on the pages of newspapers or during TV broadcasts, but on the pages of scientific editions. It is only in this way that the competence of those who question my arguments can be truly judged.”