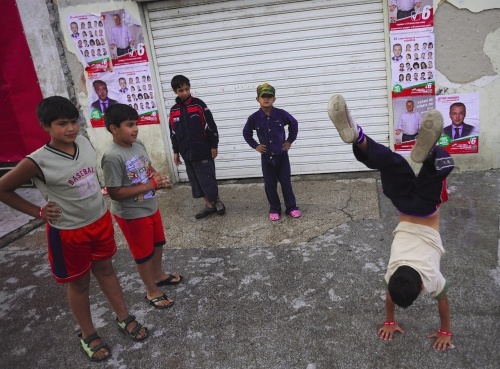 Roma boys play in front of the posters of Bulgarian Socialist Party leader and Prime Minister Sergey Stanishev during a election rally in the Roma suburb of 'Fakulteta' in Sofia, Bulgaria, 02 July 2009. Photo by EPA/BGNES

The EU has provided EUR 17,5 B for the period 2007-2013 for the integration of Roma citizens, a EC spokesperson reminded Thursday.

The statement comes one day after France asked the EC to support the programs for social integration of Roma citizens in their homelands.

According to data from the European Social Fund, 13 EU member states were concerned about absorbing the funds, allocated for the integration of Roma and other minority groups. These countries are Bulgaria, Romania, Greece, Slovenia, Slovakia, the Czech Republic, Hungary, Poland, Italy, Spain, Ireland, Estonia and Finland.

The EC spokesperson, Matthew Newman, has stated that the EU member states could absorb the funding for the integration of Roma citizens after they submit their projects.