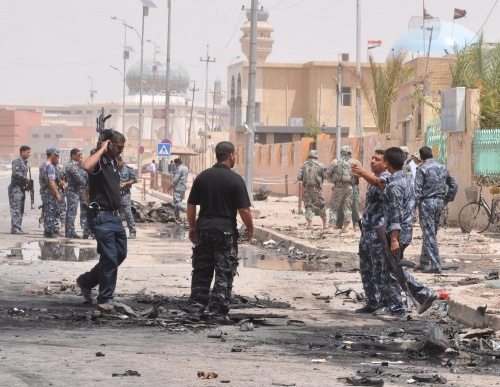 At least 59 people have been killed and more than 100 have been injured in a suicide attack on an army recruitment center in Baghdad on Tuesday. Photo by BGNES

The last US combat brigade in Iraq has left the country and crossed into Kuwait, seven years after the US-led invasion, BBC reports Thursday, citing a US military spokesperson.

The journey of the 4th Stryker Brigade, 2nd Infantry Division has been planned for weeks and the US military restricted journalists embedded with the brigade from reporting on its movements until they were almost at the border over security reasons.

State Department spokesman PJ Crowley told MSNBC the US involvement in Iraq was far from over, but it would be less intrusive and more civilian focused.

Crowley pointed out the US had a USD trillion investment to protect in the country and wanted to honor the memory of the 4 415 US troops who lost their lives in the conflict.

The independent monitoring group Iraq Body Count put the number of civilian deaths since the invasion at between 97 196 and 106 071.

The 50 000 US soldiers that will remain in Iraq will be armed but will only use their weapons in self-defense or at the request of the Iraqi government.

The pullout comes on the heels of Tuesday news that a suicide bombing had killed least 59 people, including 3 soldiers and injured more than 100 during an attack on an army recruitment center in Baghdad.