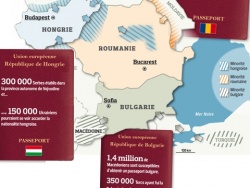 The map published by “Le Figaro” shows Macedonian as being entirely a Bulgarian priority. Map by “Le Fiagro”

Bulgaria’s Minister without Portfolio for Bulgarians abroad, Bozhidar Dimitrov, said Tuesday he was not at all surprised the French daily “Le Figaro” defined the Macedonian Slavs as Bulgarians.

“French journalists have this “strange habit” to ask experts when they write about history. And French historians are some of the best in the world. There is an Institute for Byzantine Studies in Paris and never, not even once in many, many years, have they called the our country during the times of Tsars Samuil, Gavril Radomir and Ivan Vladislav anything else but Bulgarian State and the latter simply Bulgarian kings. France had Consuls all over Macedonia all the way until World War I and they informed the historians and the government what exactly is the Macedonian population,” Dimitrov, who is also a well-known historian, is quoted saying.

According to the Minister, regarding the fact “Le Figaro” wrote the Macedonian language is a dialect of Bulgarian, the French journalist, most likely, consulted the French “Encyclopedia of Languages” published five years ago. Dimitrov further said the encyclopedic definition stirred a strong reaction in Skopje some time ago, but the French refused to make any changes.

The Minister pointed out the article had just one, small mistake over calling the Bulgarian minority in Turkey Pomaks i.e. Bulgarian Muslims. He explained the French wrongly thought those were the people who left Bulgaria in 1989 after the so-called Revival Process, which was a campaign of the former Communist regime, forcing Muslim's to replace their native names with Bulgarian ones.

Several days ago “Le Figaro” published an article criticizing Bulgaria, Romania, and Hungary for granting citizenship to people outside the EU, listing which country gives what passports to whom and pointing out Macedonia is fully a Bulgarian priority. The article further noted, Bulgaria grants passports in Turkey, the Ukraine, Moldova, Albania and Greece by insisting these are areas populated by Bulgarians. The author explained some historians believe Macedonia is part of the Bulgarian nation while the Macedonian language is a dialect of Bulgarian.