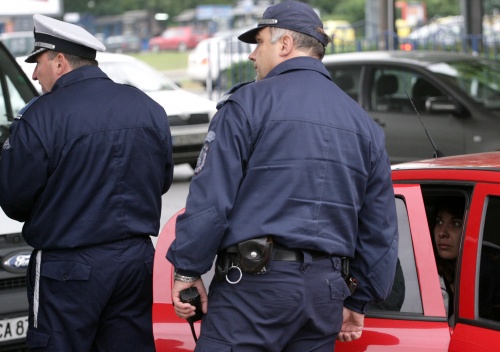 The police from the Bulgarian town of Svilengrad have detained 10 people, who claimed to be Iraqi citizens, while they were trying to illegaly enter the country. Photo by BGNES

The Bulgarian police have detained two men and a woman who tried to illegally enter the country through the Bulgaria-Turkey border checkpoint at the village of Kapitan Andreevo.

Around 2:30 am (GMT+2) on Tuesday, the police from the Bulgarian town of Svilengrad detained for 24 hours the three people who did not have ID documents and claimed to be Iraqi citizens.

Earlier on Monday, the police officers found 7 more illegal immigrants – 3 men, a woman and 3 children. They have also claimed to be Iraqi citizens but did not provide ID documents.

The men have been detained, while the woman and the children have been accommodated in a specialized room in the police department.

Around 11:00 pm the same night, the police at the border checkpoint at Kapitan Andreevo were alarmed about a mini-bus “Volkswagen” with a Norwegian registration, driven by a 42-year-old Norwegian citizen with an Iraqi background.

Two girls, 14 and 16-year-old, were traveling with the man, who presented them as his daughters. During the passport check, the police officers suspected that the 14-year-old girl has taken someone else's passport.

After an expert check, the police found out that the girl was a 13-year-old Iraqi citizen, who was traveling with another girl's Norwegian passport.

The police have detained the 42-year-old man.