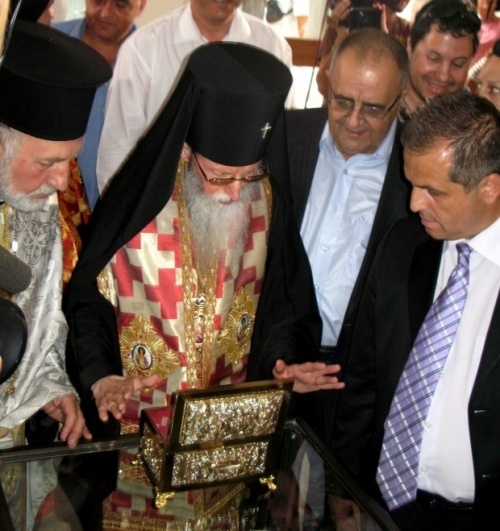 The previous reliquary of the relics of St. John the Baptist (pictured) will be used for two other holy items as Bulgarian PM has provided a special silver and gold reliquary for the st. John relics. Photo by Darik News

An expert from the Vatican has confirmed that the relics recently found in Bulgaria's Sozopol do belong to St. John the Baptist in spite of not having seen them.

This has been announced by Bulgaria's Diaspora Minister, Bozhidar Dimitrov, after on Saturday the relics, whose authenticity caused a bitter argument between him and leading archaeologists, were transferred to a special new reliquary.

“The Vatican has a committee for checking the authenticity of relics. Expert Michael Hassermann said the relics of St. John seem real to him from what he saw on TV, and what he read about how they were discovered. He does not need to see them personally,” explained Minister Dimitrov who has been criticized by many for rushing prematurely to declare the authenticity of the relics when they were found two weeks ago.

Dimitrov also joked that the relics have already made a miracle happen as Finance Minister Simeon Djankov allocated additional BGN 900 000 for archaeological excavations despite the government's austerity measures.